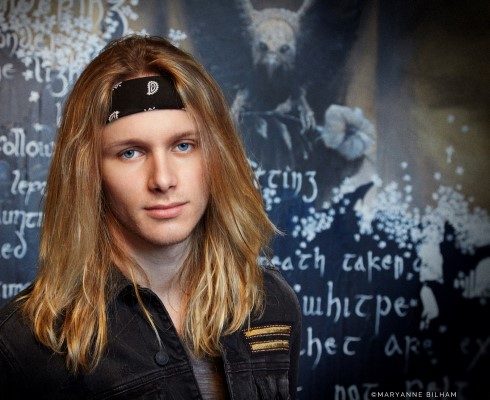 For those missing the “good ol’ days” of big hair and big guitar licks, Lyric Dubee is the artist for you! With multiple albums under his belt before the age of 20, Lyric definitely knows what’s what when it comes to Rock, but doesn’t shy away from blending that with pop, blues, classical & jazz; something he’s dubbed as Revolution Rock.

Check out his newest video for “All This Time“, and find out more about him in our interview below.

Your new single “All This Time” has such a classic sound to it, but your vocals lend a fantastic modern flavour to it! Who were some of the first vocalists that influenced you to get into music?

My biggest vocal inspiration is Jared Leto. His anthemic voice and powerful range had a huge impact on the way I deliver my vocal performance and I’m still enjoying his music to this day. Quite on the contrary, my second biggest vocal inspiration is John Mayer. His soft tone has a careful way of touching the music, building tension as the song goes on. Growing up I wanted to be able to draw the audience in with the quiet soft aspects of my voice, but also sing the powerful screams at the climax of the song.

Can it be true that you released four albums by the time you were 17?! How did you ever find the time in there to just be a “normal” teenager?

That I did! I was lucky enough to know what I wanted as a career early on so it was easy to set goals for myself. As for being a normal teenager, I don’t think I missed out on anything, but my idea of normal isn’t exactly normal. Though I was performing & practicing a lot, I usually made time for the things I love (cars, fitness, etc). I also love to travel so my career path allowed me to visit a lot of places I would have never gotten the chance to see.

Since recently signing your deal with Masco Label Group, what would you say is the most exciting change for you? What’s been the biggest challenge?

The most exciting change is being welcomed by veteran artists that are also on the label. It is a great chance to make some amazing connections. For example, my time spent at NAMM with Eric Gales and Super Sonic Blues Machine.  The biggest challenge would be letting go. I’m used to doing everything in-house. My small team and I took care of it all, promotion, releases, marketing, bookings, etc. Another difficulty is the waiting. For every move we make, it always has to be approved by the whole team to make sure we’re all on the same page.

Having performed countless shows both nationally and internationally, the most recent ones include Canadian Music Week and IndieWeek in your home province of Ontario! What’s your favourite part of performing live?

My favourite part of performing live is most definitely the show itself. I love being on stage, I feel most natural with a guitar in my hands. Though I try to enjoy the “business” side of things, I’m an artist at heart and there’s nothing I’d rather be doing.

I’m in the midst of setting up a Canadian tour for July! After that, we plan to tour the UK with a larger artist, most likely someone from the Mascot roster.

I have a whole catalogue of unreleased material and I keep writing more every day. Another album is in production.