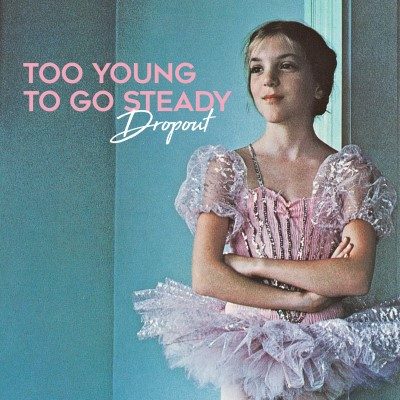 If you’ve been looking for songs to perfectly soundtrack your summer, look no further than Too Young To Go Steady’s debut EP, Dropout. The Toronto band’s ethereal shoegaze sound embodies a certain nostalgic element with “a touch of 80s pop nostalgia”.

“Where’s Ben?” is the first single released by the band. Its ambient guitars and ethereal vocals set the tone for the EP. With this track alone, one can know what to expect from Dropout: bubbling basslines, crisp vocals, and elements of 80s nostalgia. “Genevieve” is the second of the two released singles. It boasts clean, cheerful guitars. Its hypnotic vocals coo and yearn, fading and enhancing as the track plays on.

“All Eyes On You” is the opener track for Dropout. Its clean and crisp vocals are hauntingly beautiful, sounding almost romantic. The reverb on the track makes it sound spacey and atmospheric, adding to the element of romance. With its silvery synths, the 80s influence on “Video Hits” is clear. Its pulsing bass weaves through ambient guitars and its ABBA-esque vocals sound anthemic and atmospheric.

Penultimate track, “Dissenters” is slightly moodier and slower but plays in the same vein as the rest of the songs on the EP. The five-minute epic’s production is so clean, it sounds massive and transcendental – almost a reminiscent of “Postcards From 1952” by Explosions in the Sky.

Title track, “Dropout” closes the EP on a rather bittersweet note. It sounds like the last day of school. The vocals on this track are massive and hopeful. Its spacey guitar riff brings a touch of nostalgia – constantly being grounded by the bubbling bass. A flourish of cymbals adds to the crescendo of sound, closing off the EP with fairy-like harmonies echoing in the distance.

Dropout perfectly embodies the nostalgia of summer days of the 80s. Its silvery synths, ambient guitars and bubbling basslines are tied together perfectly with crisp vocals. The EP’s clean production and heavy reverb make it sound ever so dreamy. Dropout’s cinematic element will make you feel like you’re living in a coming-of-age film from the ‘80s.