Home / Shows / Show Review – No Big Deal in Streetsville, ON

Show Review – No Big Deal in Streetsville, ON 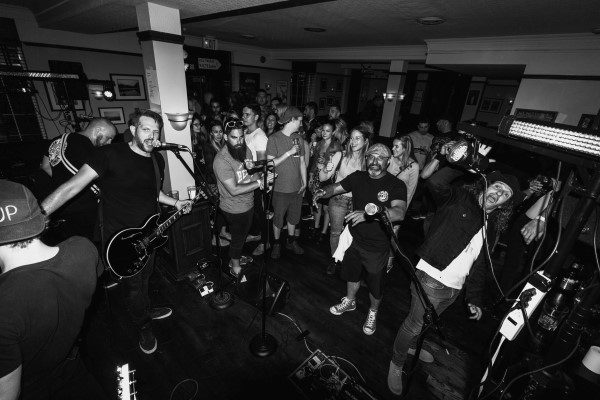 The first weekend of June in Streetsville, ON is always extra wild. The Bread & Honey Festival, carnival extravaganza, rolls through from Friday evening until Sunday afternoon every year, prompting the pubs and bars (and legendary Legion Hall) to up the ante and the locals to gather en masse for one big party. As a resident of Streetsville for over 20 years now, I’m no stranger to this environment, being inclined even to contribute to some of the more colourful displays of mischievous behaviour.

The gentlemen of No Big Deal are no strangers to this scene either, having been transformed into a mainstay in the town with their raucous party shows at the local pub, Cuchulainn’s, under their previous moniker Tomahawk Love. They debuted this June 2nd at the very same establishment, performing first a set of rocking covers songs as Tomahawk Love, Lead Guitarist Michael Amaral sneakily working Smashing Pumpkins “Cherub Rock” into one of his solos, as patrons and concertgoers trickled in steadily.

In between sets, a large black banner was unveiled behind drummer Matthew Bellissimo, stamped with the name and new logo. Guitarist and vocalist Kevin McGilp proclaimed thunderously, “From now on, everything you hear is No Big Deal!”, cementing the new era as the band kicked straight into new single “Can’t Let This Go”. From there on out NBD played an entire set of new and recent material, including hits “Deadliest Catch” and “Judy Nails” as well as this writer’s favourite “As I Exhale”, with their trademark anthemic delivery.

Everything was pure joy and a lot of raw energy throughout the night. Ever a friendly bunch, the band continued their engaging banter with the crowd and each other, really building a strong connection with the very diverse crowd. Twentysomethings nodding their heads and grinning rubbed shoulders with baby boomers shuffling and boogieing, not a soul felt left out. That’s just how the community is ‘round here. NBD deployed a third set of mixed covers, including a rip-roaring medley of classics and a punk’d out version of The Tragically Hip’s “Ahead By A Century” to end the night off with a bang. Afterwards, as I dragged my beer-soaked carcass to an afterparty, half deaf and wobbly, I knew that nothing much had changed with this bunch. They’ll still deliver a quality show worth not missing out on, and they proved their name change really was No Big Deal. Cheers to you, boys!