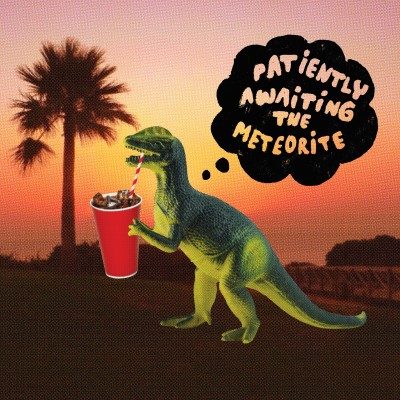 Having met in 2006 while working on Dee’s second solo album, Day By Day, a fast friendship between Dee (Urbanauts) and The Grand Brothers (Producers/Writers) that would solidify over time was formed. With synergies throughout their professional music production careers, it was a chance pop-in at a New York City studio in 2015 where the question of “Hey guys, why don’t we write some tunes together” turned into “since we’re having so much fun, let’s start a band!”

The debut album from Patiently Awaiting the Meteorite starts with a psychedelic rock influenced, “Hit the Sound Running” which could easily reminisce you of the early years of Pink Floyd. As the album continues with “Don’t Lay your Fate” and “Strange Intuition”, you can find yourself back taken back to the early years of rock.

Next follows “Everything Under the Sun” and “Devils in My Car” with the modern sound you can find with any Arcade Fire track. Patiently Awaiting the Meteorite proves themselves with this smooth transition proves that they are capable of being a top contender for being a top Rock act in Canada.

The Debut single “Electrified” is a stand out track of the album. Its a refreshing breath of air into the way music has been headed.

“Keeping My Head Above the Water”, “All This Madness” and “Hello Hello” keep the energy rolling near the end of the album. “The Place” is the perfect outro to accompany this album of modern yet vintage, diverse but flawlessly finessed, familiar yet wholly unexpected sound.