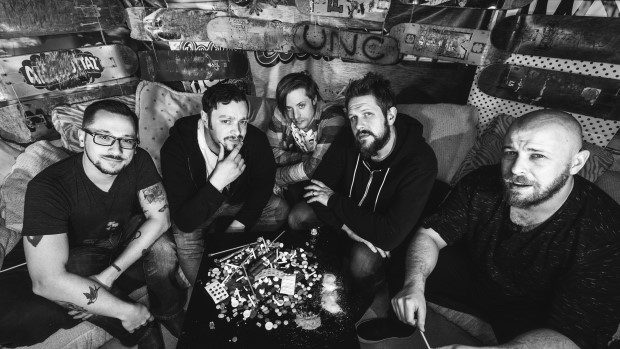 Mississauga’s own No Big Deal bring us their own fiery, anthemic brand of punk rock in the form of their brand new video for “Can’t Let This Go“. The video was filmed and edited by Michael Amaral, produced by Ross Hayes Citrullo, mastered by Joao Carvalho, and recorded at RHC Music in Toronto, ON.

In their five years as a Tomahawk Love, the 5-piece band played as much as possible, wherever possible from festival stages to club shows, and that will not change as they rebrand as No Big Deal. The video shows a glimpse at the uncontainable energy the band possesses, and will certainly make you want to check them out live. See tour dates below.

When we asked director and band member, Michael Amaral about the making of the video, he commented,

“The video was shot in 6 days in throughout March and April. Being creative and stretching your limits is very important to us and we feel we’ve done that with this music video.”

Take a few moments and check out the video below, and find out more about No Big Deal in our Five Questions With segment.

We are No Big Deal, a punk rock band from the heart of Streetsville, Mississauga!

We all hail from very different musical backgrounds, but we all really connect to the anthemic nature and attitude that defines punk rock. Writing songs can be tricky sometimes, as we often have very different ideas of where we want a song to go, but it almost always starts with someone bringing a skeleton to practice, and we work to build the muscles from there. There’s a lot of creativity and compromise involved when there are five different people with five different ideas, but we always try to serve the song first and foremost.

The stage is our favourite place to be, so there are always upcoming shows. We’re going to be playing as much as we can over the summer, and you can always find an up-to-date list on our official website. We always strive to put on the live show that we’d want to see as a fan of any other band: loud, sweaty, and fun.

If you were asked to suggest only one of your songs for someone to hear, what would it be?

Our latest single “Can’t Let This Go” is our suggestion, as it’s pretty indicative of where we’re headed musically, and it’s been one of our personal favourites since we wrote it.

Who are your current favourite Canadian bands/artists?

We are big fans of PUP and the Dirty Nil, not only because they make great music but because they also have a fantastic work ethic that we aspire towards. Arkells and Billy Talent are big staples for us as well, along with some great Canadian bands we’ve played with through the last few years like Sumo Cyco and Anti-Queens.