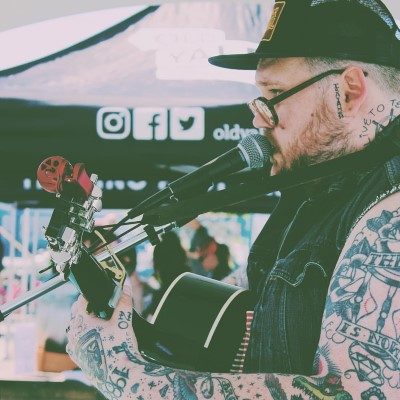 Being brought up in a small farm/fishing town outside of Vancouver, BC. Kellen Saip is a family man and an incredible singer-songwriter. Earlier this month he was voted in by a panel of judges to compete in the next round for the slot on this year’s lineup for the Rockin River festival in Merritt, BC. Please welcome Mr. Kellen Saip, and check out his video for “Shell Of A Man” from his Home Hearted Series below.

How would you describe your style of music to the readers at home?

That’s always a hard question to answer because I’m still growing and experimenting, dipping my toes into folk, blues, even some country. Usually, I just say singer-songwriter.

I’d love to know who some of your musical influences were with while you were growing up?

My mom (Connie Scott) was a huge inspiration for me and still is. Music is in my veins because of her. I was raised on a tour bus for the first few years of my life and fell in love with music and its ability to translate and speak to anyone at any time of there lives. Off the top of my head, a few others are Amanda Marshall!! Muddy waters, Bryan Adam’s, Johnny Cash, sprinkle some Dolly and Celine Dion in there.

Do you have any pre-show rituals that you always have to do before performing?

Not really. I get pretty quiet before shows and really lost in my own head it’s the calm before the storm. I’ll usually have some whiskey with me before and during the show because its delicious and water is highly overrated.

The song “Shell of a Man”, can you tell me how that song came to creation? I can tell it’s a very emotional song in your YouTube Home Hearted series.

That song is going to be the title track to the next record I’ll be recording. It hits home for me in a few ways. One being I’ve lost a few friends recently to substances and it’s becoming a big problem for this generation so the message is simple, you only get one life sometimes it’s hard but it’s all you got so don’t throw it away. It also touches on how hard it is just to raise a family or make rent or even buy food these days. It’s very easy to get overwhelmed and depressed and it always feels the dark times last a lot longer than the good times but finding that light and holding on to it is the goal. Here is the link to that song. https://youtu.be/itmWPsgl5yQ

How does it feel to be voted in by a panel of judges for this opportunity of possibly showcasing your talent in front of the crowd at Rockin River Fest?

That’s a really cool feeling that I’m still trying to wrap my head around haha. I definitely don’t fit into the new age country mould but people like wild cards and I’d love to shake up that festival a little bit. I’ll be the one wearing old man loafers instead of cowboy boots.

Has there ever been that a Canadian artist you looked up to and just wanted to collaborate with, past or present?

Oh man, so many!! I’m a pretty big fan of Amanda Marshall I think her self-titled record is one of the best records I’ve heard to this day! Shes also touring again so Amanda hit me up. There’s just so many more! Canada has a special sort of spark in its artists.

Have any artists in particular constantly playing on your playlist right now?

My pals in the Great Atlas just released a new record my daughter is obsessed with it so that’s always spinning. I toured with them this year and never got tired of hearing them.
Colter wall and the Dead South good Canadian boys! Nathaniel Rateliff’s new record is awesome as well as William Elliot Whitmore, John Moreland, and Lucero.

Easiest question for sure!! Die Hard (I know there’s more than three but I try and pretend they don’t exist…)

Favourite game Ninja Turtles – Turtles in Time. Just played it a few weeks ago with my bud we beat it in less than half an hour!

What are your plans for the rest of this year?

Rest of the year is pretty crazy going to get going on pre-production for the new record in between touring. This August I hit the road on a Canadian tour and get to play with some amazing artists like Little Crow, Tiger Moon, Josh Norman, Leah Barley, Dear One and Shapes and Shadows. Then in September hopping on a tour as well. the dates will be released soon so be sure to follow www.facebook.com/thekellensaip for details.

Wel,l Mr. Saip Is there anything you like to say to the fans before we go? And thank you so much for taking the time to answer my questions.

Thanks so much for the chat guys love what ya do. You can find me all over the interweb just search Kellen Saip. My new EP is available now!

When eating flaming hot Cheetos and watching die hard use chopsticks so you don’t get stained fingers.