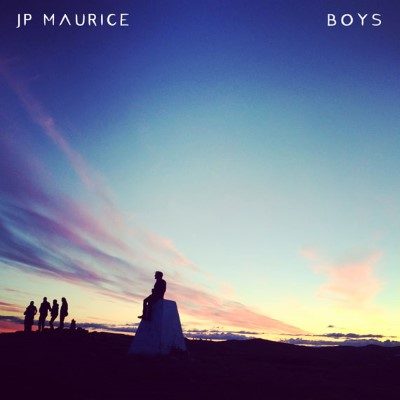 I was worried about this review. I listened to the album a couple of times and couldn’t seem to find a way in. I’m older, forty-five, with more miles than I can or even want to count. So after listening to JP Maurice‘s new album Boys, his follow up to the 2017 EP Girls, I felt stuck. Where do I fit into this album? This experience? This stage in life? When I am at a loss for words, I turn to music. Right now, my place looks like a bomb went off. I’m moving apartments. Exactly one block west of my current place which is ridiculous and frustrating. So, in that headspace, I pulled out my Chess Records vinyl, thinking whatever’s broke, the blues can fix.

The fix came while Sonny Boy Williamson was singing:

“I’m beggin’ ya baby, cut out that off the wall jive,
if you can’t treat me no better, it gonna be your funeral and my trial.”

I love that tune and remembered that Nick Cave had recorded a cover of it on his album of the same name “Your funeral, my trial.” Huh. Something old, something new. I put on my copy of Cave’s album and realized again that my “in” on JP Maurice’s album was where the “in” always is. It’s the music dummy! If Sonny Boy can reach me and a weird kid from Australia then certainly, even easily, my way into Boys was already set by everything that came before.

Recorded at Blue Light Studio in Vancouver, Boys is a collection of ten songs that make my continued argument that genre really doesn’t matter. You could say Boys is a pop album, sure, but you’d be blowing past the deeper connections and foundation that Boys is built upon. The overall feel of the album is a little off center which is a great thing in that there are fun, catchy tunes such as “Sorry” where I loved the line “I never stopped dreaming, you can’t keep leaning on me” versus a more introspective track “Fall In Love Again” which has a wonderful pulse and seems to catch a person searching for permanence in a transitory world. Technically the drums and bass are tight and the guitar in the wash is great. As always, there are hits and misses on the album. And again, as always, when I feel a song is a miss it is due solely to my taste and bias. Fortunately, there is very little on Boys where I thought, man, that track went right by me.

The opening track is called “Go” and the line “You’ve been crushed by the hands that draw you back” was, for me, the lyrical centrepiece. The whole track carries a rising type sound, so the push and pull nature of its themes; staying versus going, action versus inaction really give the song a kind of dichotomy between music and lyrics. “The Seed” is a track where I found an appealing connection to some of the best beat poets who used a poetic device called, without originality, repetition. Allen Ginsberg was the all-time champ when it came to that device which borrowed heavily from Walt Whitman so there’s no real shock there, or that musicians employ the same technique to songwriting. “The Seed” has a fantastic hook wrapped around a guy who is trying to figure out what happened. The use of repetitive lyrics mixed in with an echoing guitar ask questions, and keep asking them without waiting for an answer which is great for the song but bad news for the guy in it. “Rocket” follows and everything on this track builds to the chorus. With a lyric like “traded in my gravity for gratitude” “Rocket” is not any kind of pop song, I thought it echoed Tom Petty’s style and JP never hits a false note on the track. The session musicians are tight and the track has a killer guitar solo.

“Yoyo” is yet another proof of why you should never label an album as just one thing. My raw notes say “Huh. Joy Division beginning.” The lyrics on the track are lain like Lego blocks forming a solid base and the tracks mix is best heard in headphones because there is some true genius in the soundscape and production. Following the solid “Yoyo” is one of the best tracks on the album titled “Shapeshifter” which reminded me of “Glitter and Gold” by Barns Courtney. I mean both that comparison and the one I am about to make as high praise because JP’s vocals on Shapeshifter reminded me of Gowan, who, despite me never liking anything he did, had an astonishing voice that was singular to itself. “Shapeshifter” is for me, the most interesting song on the album as a writer. The idea that we morph who we are to what people need to see and our willingness to be whatever we think a person needs is a terrible and self-destructive thing. What gives the track its depth is the guy knows it ain’t right with lines like “I’m becoming a great pretender” which gave me a sense of loss type when the song confronts the truth of that. One of the biggest surprises on Boys was the track “Big Country”. It is a departure in tone and style but not so much as to be detached from the album. The acoustic guitar and piano mixed with a great bass lead drives the song in a very Nashville kind of way. My absolute favourite lyric on the album is “You see right through me like I’m a stained glass Jesus.” That line alone is worth the price of admission. “Vice” follows up with an old school type of Motown intro. There was something in the chord progression that bothered me and when I finally figured out that the track had copped a lick from “Tracks Of My Tears” by Smokey Robinson, I was over “Vice” as my own bias reared its head here because, in my opinion, if you are going to echo one of the greatest Motown artists of all time, you better be as good and so this track was a miss for me but only because of that. The recording is slick and there is nothing wrong with the production, but it felt, for the first time, clichéd.

The final track on Boys is the best track on the album and my favourite. “The Answer” is a love poem but with that urban beat vibe where guys lime Ginsberg, Kerouac, Corso, Cassady and Kaufman would have thrilled over the lines: “last night I stayed up late and I woke up to the apocalypse” and “Fuck that noise and the advice we take”  and “Even if you sell out you still get owned” and “Bless this life, let’s all get stoned.” How do I know Ginsberg et al would have loved this?  Because they spent their lives writing to these themes and making those arguments. All around the track is a great riff. There is nothing cliché on this track and even the “southern rock” guitar in it kicks ass. As it turns out, and what I should have known, is that there’s always a road into an album even if it feels alien to your experience. JP Maurice was able to get this punk past the pop label and all of the baggage that goes along with it for a guy like me. This album is a massive success and I see Canadian music fans, radio and concert halls yearning to spin, listen and watch JP Maurice perform this album.