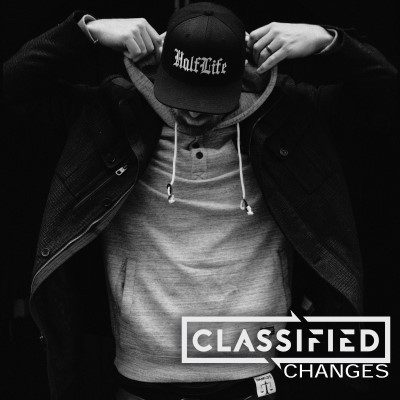 Juno award-winning Canadian rapper, Classified is back with a visual for his new track featuring Anjulie, “Changes“, which was released via Half Life Records on April 27. The single now has over close to 250k streams, which is really no surprise.

Classified shares on the video,

“We shot this video in my old high school, in the Auditorium room…same room where I did my first show… taking it back with some old show footage, old videos, and new memories. Thanks to Anjulie for everything, and to everyone who helped bring this video together.”

We had the chance to ask Classified a few questions surrounding the single and video, check it out below along with the video for “Changes”.

You just released a video for your newest single, “Changes” featuring Anjulie. The video was shot in your old high school, what else can you tell us about the video shoot?

It was a last minute thing lol. We actually shot another video for the same song, but I felt like something personal was missing in that video so I wanted to make this one really reflect what I was talking about, and be more specific with regards to my life and what’s going on. That’s why it was cool to use a lot of real footage from tours/ shows/ hanging with friends etc.. It made it more personal, and basically I shot this video with my brother and a couple of friends.

What can you tell us about the writing process message on “Changes”?

“Changes” was written by piecing a bunch of lines/ thoughts I had over the last year together. I always write down song idea’s and lines, etc on my phone but with this song I wanted to use all of the most personal lines I had and make it really feel like I’m talking to you about what’s going on in my head. I found this song “Changes” was written with lines that usually I would just keep in my head or to myself, but I wanted to put it all out there on this one.

The single was released on April 27 and already has close to 250k streams. When releasing a single can you judge how it will do with your fans?

Nah not really, but with this single, that’s exactly who this song was for…my fans, the hardcore ones who’ve been down for years and don’t just listen to my “radio” songs, but actually dig into my albums, come out to the shows on the tour, etc. Reception for the song was/is amazing. I think because the song is so personal, it makes other people feel that same personal connection and right away when I released it I could really tell my hardcore fans appreciated this song, which is so dope cause that’s who I wrote this for.

How was it working with Anjulie for this track?

It was cool. I met her a few years ago and we always kept in touch. I actually sent her another beat that I created to see if she could try writing a hook. We didn’t use that one but she sent me this idea, and I built the song around her singing.

You’ve collaborated with so many Canadian artists in your career, is there anyone you’d love to work with that you haven’t had the chance yet?

For sure! Mercules, Drake. I could go on for a while but I’m a fan of people who do their own thing and don’t follow the trends.