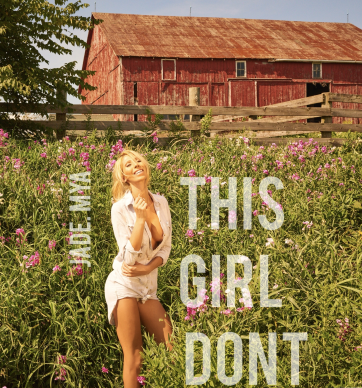 Canadian Pop-Country artist, Jade Mya has just released the third single entitled “This Girl Don’t” from her upcoming sophomore album, Dirt Covered Rhinestone which is set for release in September 2018.

“The third single off my album, This Girl Don’t, deeply resonates with me, as it specifically talks about the struggles faced by women of my generation,” says Mya. “This song achieves the difficult task of talking about a serious topic but with a wild sense of humour.”

Co-produced by award-winning producers, Justin Gray and Tino Izzo, in collaboration with Mya, it showcases her strong vocals, as well as the electric guitar.

“This Girl Don’t” is being released under ILS (Independent Label Services Group), a Toronto-based international entertainment distributor and marketing company for Caroline International, a division of Universal Music Group. Her sophomore album, Dirt Covered Rhinestone, will be released this September, and Mya will be heading across Canada late June and July on a media tour with stops in Montreal, Ottawa, Winnipeg, Calgary, Edmonton and Regina.

Take a few minutes and check out the single below!