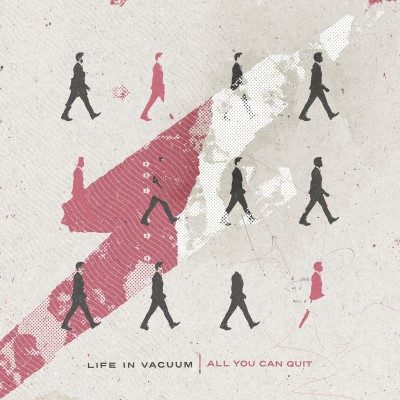 If powerful art comes from adversity then Life in Vacuum have really come to benefit from how infamously bad the past two years have been. The Toronto noise-punk trio released their latest album, All You Can Quit, on April 27th, 2018 and fans of post-punk and hardcore are not going to want to miss it. The band have been performing for over a decade, and while you might expect time to have tempered their intensity nothing could be further from the truth. Every track on the album is downright kinetic, with a level of complexity and musical variety that proves there is an order to this chaos.

The auditory assault kicks off with “Jazz,” an opener whose title may initially seem misleading but which also exemplifies what sets Life in Vacuum apart from their peers. The track is explosive, but it still has a certain rhythm to it. The second track “Apartment” is the real jewel, though. When discussing the track with us during its initial release as a single, vocalist Sasha Chornyy said that “everything just somehow fell into place,” and it really feels that way thanks to some of the most memorable guitar riffs from the album.

Later tracks like “Quitting” and “All You Can Eat” amp up the speed and aggression to the nth degree, with the former especially having a manic quality that captures the feeling of trying and failing and trying again to break a bad habit. These are balanced out by the more focused but not less primal “Sinker” and “Champion.”

Though, again, primal may not be quite the right word to describe this sound. That implies a lack of control that is simply not present here. And it is truly fascinating how the band convincingly balance seemingly boundless energy with tight and precise compositions.

If you are not typically a fan of the noise genre then this album may not particularly appeal to you. For anyone who is a fan, or for anyone who appreciates impressive musical composition, this is not an album to miss.