Bluewater Borderfest coming back for a second year in Sarnia 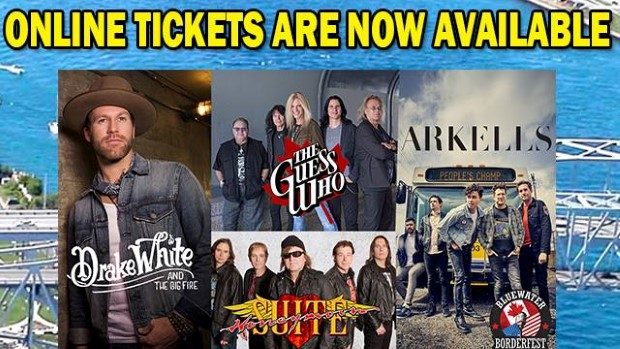 After a long summer music festival drought that began with the cancellation of Bayfest, the people of Sarnia, Ontario are gearing up for the second edition of Bluewater Borderfest.

With its aim to entertain fans on both sides of the Bluewater Bridge, 2018 will build on the foundation created in 2017, which brought country superstars, James Barker Band, Eric Ethridge and Brett Kissel, to the city.  This year’s lineup opens up the festival to a mix of rock and country acts that are sure to please music fans.

Let’s take a look at this year’s headliners:

Headlining the opening night of Borderfest is American singer, Drake White, as he tours in support of his new five-song EP, Pieces.

Bringing classic Canadian rock into town for a summer evening show has been a long favourite for Sarnia concertgoers for years.  In 2018, Borderfest brings the Guess Who and Honeymoon Suite to the stage.

Rounding out the summer fun will bring the kids out, as Canada’s current “People’s Champs” Arkells headlines an evening also featuring Matt Mays, Dear Rouge and local rockers, Rodney James and the Riot.