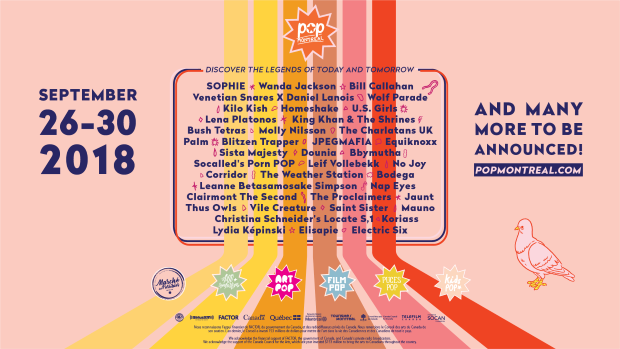 POP Montreal announces its first wave of artists for the 2018 edition taking place September 26-30. The non-profit, artist-centric international music festival prioritizes
diversity and creativity when selecting the inspiring collective of local and international artists. Renowned for its robust programming of multidisciplinary artists, and deeply rooted in its local community, POP Montreal is proud to continue to deliver a festival of discovery for all who seek a refreshing preview of emerging acts, critically acclaimed artists and legacy greats. This

In addition to POP’s extensive music showcases, the festival hosts a variety of programming including; Film POP, Art POP, POP Symposium, Puces POP, and Kids POP —the five-day event is sure to have something for everyone. For a limited time, the POP Montreal Discovery Pass is $100+tax (regular $300+tax) Pass includes skip the line access to the whole festival and more! Don’t forget POP Montreal’s warm up to summer, the Marché des Possibles every weekend from June 22 to July 29.