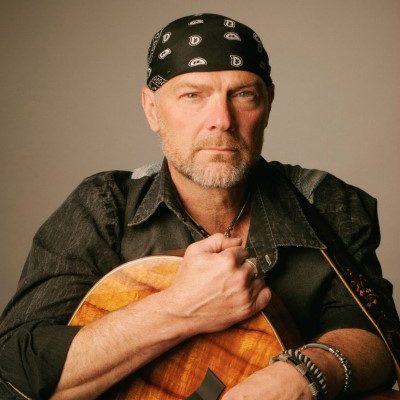 Whether you call him a musician, author, activist, Survivorman or any of his other chosen paths, Les Stroud knows our time on this planet is, but a blip, so chooses to fill it with more lessons than many would attempt to tackle on their own. Lucky for us, his fifth album, Bittern Lake, includes many of those.

Opening Bittern Lake with your own versions of “Death in the Wilderness” (J.J. Cale) and “Big Yellow Taxi” (Joni Mitchell) sets the tone for the record in way that isn’t only musically impressive, but also shares the overall message loud & clear; “if we’re not gonna do it, who else will?!” Did you have a specific process when it came to which songs you wanted to cover on the release?

Mike Clink (the producer) and I knew that we wanted to focus the lyrical content of the album’s songs specifically to whatever had either a strong environmental message or a tone of celebrating nature. I have so rarely recorded cover-songs (someone else’s material) on my albums that I thought this was a golden opportunity to do just that – but with a message. I knew about Ben Harper’s song, Bruce Cockburn’s and the Jeremiah Johnson theme song from my own listening. And of course Big Yellow Taxi has long been lauded as one of the best environmental songs of all time, but I also just went looking through online searches and that is how I found Death in the Wilderness. Mike and I are in agreement that to do a ‘cover’ is to make it your own. So the treatment we gave those five songs had to be something I could own and perform well, as well as be significantly different from the original version. It took a while to figure out what to do with Big Yellow Taxi, as it has been covered so much, but always with the happy jangly guitar. I thought – this is actually quite a dark song – and it needed a dark treatment from me to really be something special. I sat down one day and started playing it in a traditional delta blues slide arrangement and it hit me immediately as the right thing to do. Joni herself heard it before we released it and liked it very much, lyric changes and all! Same thing for If a Tree Falls by Bruce Cockburn. A vastly underrated song in my opinion but Bruce’s original version was recorded in the mid-eighties with that kind of relentless drum rhythm and I wanted it to be as sad sounding musically as the lyrics seemed to imply.

While the album also includes covers from Bruce Cockburn & Ben Harper, there’s also plenty of your original material with the entire collection being recorded at your home in Huntsville, Ontario. Is this the first time you’ve recorded an album at home? What was the biggest advantage? Biggest challenge?

No, in fact after I did my debut album, when I got back in the game of making music in between adventuring and filmmaking, and then did a short album with Canadian hit act The Northern Pikes, I was itching to start laying down all of my new material that was coming out from my muse in a very prolific manner. So I recorded ‘live off the floor’ for the next two albums: Wonderful Things and Off The Grid. Recording has taken a lot of twists and turns over the years. You didn’t dream of recording an album in the 70’s unless you were signed to a label and were pretty much a budding or established rock star. Then home recording took off in the 90’s but I hated spending long hours learning software and installing codecs and swearing at your computer when it crashed….again.  I knew what I wanted. I wanted old school. So many of the albums that have a great story to them seem to come from bands being in one place, at one time, all living together and finishing an album in a week or two. Music From Big Pink, Goodbye Yellow Brick Road, Zepplin 4, all pure magic. I find the old school method of every player being in the same room and you get what you get as you play, extremely romantic. The real deal so to speak. You better get it within the next 5 takes cuz that’s all you’re going to get and then you’re on to the next song. (After you all have lunch together of course).  You get so many ‘happy accidents’ with this method of recording. And guess what, the musicians LOVE recording this way. We’re all so tired of endless overdubs and pitch correcting and ‘comping vocals’. But yes, the biggest challenge is, of course, to get it right. To have us all hit that mark on the same take at the same time. It’s not so hard for a touring band that is playing together every night. But I don’t have that, I have a new group of musicians, some of which have never met, every time and we have 5 days to get 10 songs done. Fortunately, I have met incredibly talented players who get it. It’s about the music. I think the engineers and producers have a love/hate relationship with it. They love the concept but hate the reality of the technology of recording old school.

Many people know you from your previous four albums, but also your seven seasons of Survivorman. From what I’ve heard of the music industry, it’s a bit of “survival of the fittest” at times, too, so is there anything you learned out in the wild that help you with your musical releases?

To be myself. You can’t fight the wind. You can’t go upstream in the river. I learned to listen to my heart out in the wilderness. The music industry will come, go, change, alter and go back to retro. You can’t predict it any more than you can predict the weather. I made a mistake when I thought that the world of the 80’s music no longer wanted anything to do with an acoustic guitar or a rock sound. I gave up too soon, before it all eventually came back (heralded I believe by Melissa Ethridge). I can’t bend nature to my will of what I want it to do, but I can live within it pretty much doing most of what I want to do. It’s the same with the music industry. I’m presenting a message, a lyrical content and a sound that is a blend of all I have had infused within me over my lifetime. Its folk, blues, rock, progressive, pop, its whatever label you like to put on it. It ain’t gonna be rap music but that doesn’t make it any less important or meaningful. I now get almost as many people telling me that one of my songs made a difference in their lives as I do for my adventure and survival films. Nature, that is the natural world, with its benefits of health, strength, solace and comfort always comes through in the end.

You’ve shared the stage with Slash, Jonny Lang, Journey, Alice Cooper, and Blues Traveller, to name just a few legendary acts. Are there any newer acts that you’d love to hit the stage or collaborate with?

On another side of entertainment, you’re starring alongside Tom Green in Interview a Monster coming out this summer! What was the biggest challenge in filming this vs. filming your own show?

OMG!  How did you find that out?? Uhmmm – ya that’s correct. Well, it was a lot of fun. It was one of those projects where I didn’t allow Les Stroud the filmmaker to show up. That would’ve ruined it for everyone! It was all about having fun and doing a silly movie and testing out and stretching (or rather seeing if I had any) acting chops. Its either going to be really good – or so bad it’s really good, like Sharknado! I also just released a new series with Nat Geo Wild called Alaska’s Grizzly Guantlet and this was a situation where I DID allow Les Stroud the filmmaker to show up, even though I wasn’t in charge of the production. Because I cared about the subject matter being real. The series is good and it’s strong and I know people will love it, but I didn’t make any friends behind the scenes when they all found out just what it takes to actually be AUTHENTIC. Its what they asked of me, but to be fair, to remain truly authentic in an industry that now celebrates total fabrications as examples of honest filmmaking, will always make me the outlier. Being uncompromising in the film industry doesn’t make you any friends. But I digress…..

5 days hiking in Northern California for starters. There are two new music videos coming out directed by none other than Matt Mahurin (U2, Tom Waits, Metallica, Disturbed). One is for my lead single from Bittern Lake called ‘How Long’ and the other is for my cover of ‘Big Yellow Taxi’. On the heels of releasing Bittern Lake, I have my next album already mastered and ready to launch. I wouldn’t go as far as to call it my albatross, it’s a joy to have created, but it’s been ten years in the making and it has killed me not to get it out sooner. That said, all things in good time. It’s a far more ambitious album musically, pulling in ancient chanting and aboriginal ceremonies as the basis of some of the rhythms of the rock songs. It is called Mother Earth, is produced by Mike Clink and features the likes of Slash, Mindi Abair and Steve Vai playing solos. It really is a very powerful album.

I also have a new independent feature documentary film I am releasing called La Loche. It’s a story based on the school shooting in La Loche, Saskatchewan, Canada in 2016 and about how nature can heal. The score is being done by Bruce Cockburn, along with some songs from Robbie Robertson, myself and orchestration and scoring by David Bateman.

And of course, there are always the concerts. As many as I can get people out to I will play. I have a big one June 9th in Bend Oregon at the Tower Theatre, June 15th in the Gamiing, Reserve in Ontario and a few others popping up here and there. After I finish answering this question I’m of to Toronto to jump up on stage with Journey, always an incredible thrill!