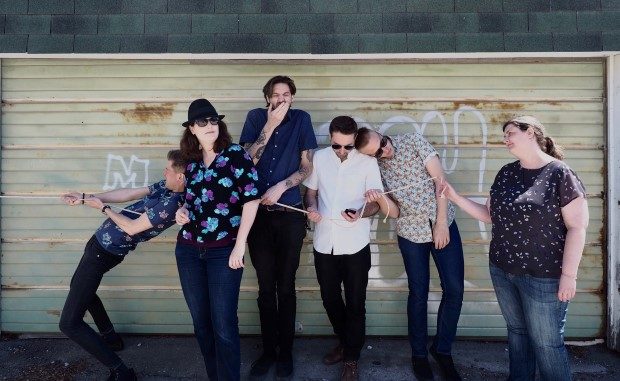 Toronto’s Places Erupt have unveiled the video for their newest single, “Bloggers”, which is about online trolling. The video, which was filmed by Pedja Milosavljevic of Balkanada, depicts a character who shies away from expressing extreme political beliefs face to face with people and then goes home and rants online.

When asked about the single, the band comments,

“Bloggers is about the phenomenon of trolling, where people shirk away from expressing their political opinions until under the safe shield of cyber anonymity, ranting angrily online. It’s become a terrifying and unhealthy side effect of the internet, poisoning discourse and breeding hate. In the real, physical world, the troll is blah and beige, while in the cyber world, he grows into this outsized monster, breathing fire over everyone in his path.”

Check out the video below, and find out more about Places Erupt in our Five Questions With segment.

We’re a band that revels in our contrasts. We’re dissonant and danceable, celebratory and furious, manic and controlled. Visualize orchestral music, rock, shoegaze and post-punk swirling about in a tornado and this band is at its centre, flanked by defiant, dancing black swans.

We do! We’re performing at the Junction City Music Hall on June 9th in Toronto. It’s our video release show.

We’re also performing for the Cinquefoil concert series at The Church of St. John the Evangelist (The “Rock on Locke”) on June 15th in Hamilton.

Our performances: we come onstage shrouded in fog, accompanied by ambient guitar pedalwork. Our sets range from explosive to blissful. You can dance to most of our songs but also may suddenly find yourself in an introspective trance mid-set, only to be snapped out of it and get them feet moving again. Guitarist Mike J towers in the background working away on his rack of pedals, Anna and Katie wail away on their strings, Greg urgently moves from the front of the stage to the back, locking eyes with drummer Mike L at critical moments, and lead singer Lee manically moves about, with elaborate arm movements.

The short answer: if you see us live, our hope is that you’ll experience a wide range of emotions and walk away wanting to do something drastic.

“Bloggers”, the new single and video. It’s a song about online trolling. The video depicts a character who shies away from expressing his extreme political beliefs face to face with people and then goes home and rants ad nauseam online, unhinged and uninhibited.

More on the video:

The political beliefs that the character espouses and those of the people he encounters in public are purposely vague. The buttons that his co-workers and passersby wear are yellow and blue, while the main character has buttons at home that are purple and orange (the opposite colours of yellow and blue). So they’re symbolic of a polarity of political opinions that exists between him and everyone else. We didn’t want the buttons to represent a particular issue; rather, we wanted the focus to be on the isolation and fury of the troll.

At one point in the Bloggers video, you can faintly see objects breaking behind the troll character. Lee and Pedja Milosavljevic, the film’s director, went to a rage room in Toronto and spent an hour breaking plates, bottles and stereos with a baseball bat and filming it. They did so while listening to the Pixies and Snapped Ankles. While going to a rage room was never on their bucket list, they have to admit it was incredibly entertaining.

In order to decide what the troll would actually be typing in the video, Lee did some research by combing through the “comments” section of the Breitbart News Network. It was the worst Saturday morning he has experienced in recent memory.