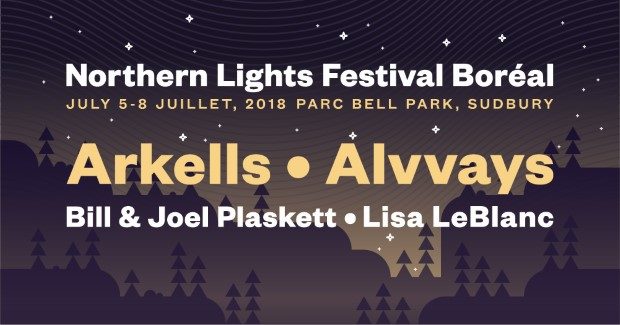 Although it seems like just days since Sudbury’s Northern Lights Festival Boréal made its official lineup announcement including Arkells, Alvvays, Bill & Joel Plaskett, Lisa LeBlanc and so much more, they aren’t done!

Now, NLFB has a few more lineup surprises to announce, as well as details on accommodation packages.

Lee Harvey Osmond is the brainchild of Canadian music veteran, Tom Wilson. At 53, Wilson discovered he was adopted and had Mohawk ancestry – a story (among others) he told in his 2017 memoir, Beautiful Scars (recently released to much acclaim).  The festival weekend will include a special, exclusive literary/music performance based on the book, aboard the William Ramsey Cruise boat. Lee Harvey Osmond will also perform on the festival’s Main Stage.

The festival will also include a workshop and after-hours performance paying homage to the hip-hop arts: rapping, DJing, and beat making. This will include such artists as Winnipeg’s Indigenous hip-hop veteran HellnBack; internationally acclaimed 5-time World Champion DJ and producer Vekked; live sampler master and producer Fresh Kils; and Toronto-based rapper NiLLa.

Cruises aboard the William Ramsey will also be offered, with varying themes and atmospheres. Saturday afternoon will include a raucous bluegrass/outlaw-country party with Sudbury’s Murder Murder, as well as a literary/musical cruise with Tom Wilson (Lee Harvey Osmond). Sunday afternoon will include a rock n’ roll cruise, in collaboration with local concert presenter Party Cannon, performers TBD.

Information on accommodation packages, musical cruises, and more can be found online at nlfb.ca. The (almost) full festival schedule is now posted, with a few final details TBA. Advance pricing for festival passes is currently in effect. NLFB has playlists on Youtube and Spotify where the lineup can be previewed.