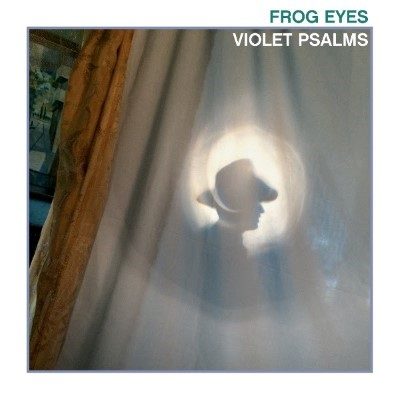 Victoria indie-rock band Frog Eyes are releasing their latest and final album, Violet Psalms. Due out on May 18th via Paper Bag Records, Violet Psalms is self-described as “a giddy lament; a gnashing jubilee; a rain-drenched allocution on hope vs. horror, paradise vs. pride, Marx and Brexit and bad acid trips.”

In layman’s terms, it may be their last hurrah, but they’re going down swingin’.

Accompanied by the Skygreen Leopards, Zachary Cale, and Hello, Blue Roses, on their farewell cross-country tour, Frog Eyes have packed all of their 17 years’ worth of experience into Violet Psalms. The opening track, “A Strand of Blue Stars”, is a reverb-heavy, darkly glam concoction of truisms. Melodically rich, undeniably idiosyncratic, and yet still inviting, “A Strand of Blue Stars” is a middle finger to the mainstream that draws the curtain back on the rest of the album.

The remainder of the 9 tracks— from Bowie-esque “Sleek as the Day is Done” to the wistful lead single “Idea Man”— displays a vivacity and diversity that’s impossible to forget. Violet Psalms may be the band’s last hurrah, but fans may rank it as one of their best.