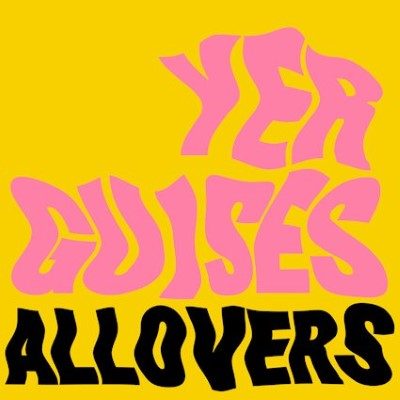 There was a bar in Winnipeg where I spent, some might say wasted, a lot of my time. The bar, The Royal Albert Arms or The Albert was one of the last standing punk rock bars in Winnipeg. It was a place where you didn’t drink the draft, use the bathroom or start a fight. This one night I was there with my friend and incredible drummer John Jacobs. We were talking about the band he was playing in at the time and how to define the sound. John laughed and said “we call it… … …smooth punk.” I never forgot that description and it still makes me grin.

Smooth punk was one of the first things I thought while listening to The Allovers new album Yer Guises on Anxious and Angry records. The overall sound had me thinking of a few bands like The 13th Floor Elevators and their non-stop wall of sound. I also thought The Allovers had the same sort of groove as Agent Orange. It’s not unusual (NOT a Tom Jones reference) to hear a singer in a punk band use their voice without a raspy, growling nastiness, but Matt Pahl (vocals and guitars) sings in an unaffected natural voice in the same style as Chi Pig from SNFU.

The Allovers, offer up fifteen songs and only one track “Allovers’ Theme” is over three minutes in length which, as a punk fan, is enormously appealing. At first listen The Allovers seem to be light-hearted, which makes their social commentary on tracks like “Rinky Dink” and “I Remember Beaver Lumber” more cutting.  Yer Guises opens with Blue Kangaroo and my first thought was “Holy S#!t what a wall of sound.” “Rinky Dink” follows up and it’s in this track where you realize the bass player Paul Arnusch is absolutely devastating. “Tubtime” follows “Rinky Dink” and my rough notes say “Man, if Roy Orbison sang for the Ramones!” The track “Dog Team Cooperation” stretches the punk genre into a Meat Puppets vibe and the album continues to push genres with “Hitchcock Twist”  where the sound is Joy Division meets Richard Hell and The Voidoids. I thought I heard a cowbell in “Hitchcock Twist” which, if true, is unforgivable (written with a smile).

What kept making me stop and go back to listen to tracks was the musicianship overall but especially in “Happy Pop” the bass and overall low end is fantastic. “Kitty Kat Girl” had me listening then relistening to drummer Garrett Heath’s metronome timing and great fills making me think: Chuck Biscuits of DOA and Social Distortion, The Circle Jerks and others and if you are a fan of distortion “Gooby” will meet your every distorted desire. “Honey Gets Me Flies” has a great guitar solo straight from Ron Asheton of The Stooges fame. Again I was blown away by the level of bass guitar.

The only criticisms I have with Yer Guises is that the album tends toward repetition and the vocals are sometimes lost in the mix, which is annoying because you want to hear what The Allovers have to say. However, that is the only negative in an otherwise outstanding album where tracks like “Hey Joey” get on top of a groove reminiscent of The Hives and bands live from your local punk bar. The vocal had me laughing as I kept thinking Jim Morrison but after a minute I was thinking “Nah. This is Anti-Morrison.” Flowing from one song to the next “Sugar Shed” is right in the pocket and defines what my buddy John and called Smooooooth punk. The final track “Allovers Theme” has an Iggy Pop barking around In a great production where you hear depth in the sound like your favourite seven-layer dip. The Allovers have tapped into a sound that is all their own borrowing from the best genres of punk, indie and lounge.