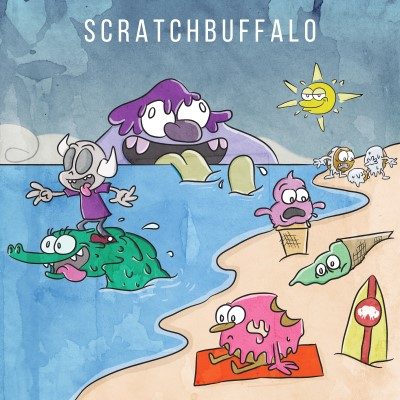 Scratch Buffalo comes to an explosive start with “Piranha”, a brief jam that immediately introduces the carefree and fun nature of the band in a manner that is reminiscent of the garage punk stylings of The Beastie Boys. Much like the songs to follow, “Alligator” and “Kill The Sky”, it is quirky and bursting with an infectious energy. While Chris Nash’s vocals may be an acquired taste as they sometimes sport a cartoonish quality, it is this where Scratch Buffalo get their character from; drastically separating them from their garage rock peers.

It is in the middle of the album where the songs begin to change slightly and subtly in tone to reflect a strong sense of songwriting. The structure of “Girls In The Back Row” feels like it was pulled out of The Rolling Stones’ songbook with more mature vocals and soulful blues lead lines on the guitar filling in the spaces between the chords, while “Nightmare Coming” features an incredibly tight and groovy instrumental break towards the end of the track. Such deviations from any expectations can further be heard on the rhythmic “Salamander Shake” and the ambitious “Hyena Snow”.