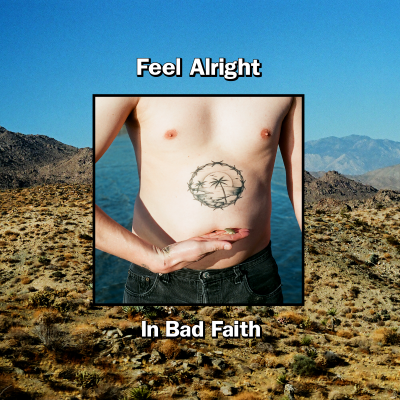 Calgary’s powerhouse garage-pop band, Feel Alright, are releasing their sophomore 12-track LP, In Bad Faith, this May. Having started as a recording project by frontman Craig Fahner in 2011, Feel Good has evolved into a dynamic and collaborative live project. Guitar-heavy, 90’s-reminiscent, and undeniably energetic, In Bad Faith packs in that perfectly beachy summertime vibe.

Early-LP track “Truth About Us” encompasses the tone of the LP as a jaunty headbanger brimming with impactful lyrics that never once distract from its infectiousness. On “Truth About Us”, Fahner says, “I’ve always admired how great power pop songs can squeeze so much meaning and melody out of simple rock and roll truisms. ‘Truth About Us’ is our attempt to pack as much energy and melody and love and mystery as possible into a three-chord stomper, in the spirit of Nick Lowe and Wreckless Eric.”

Even later-track “Tires On The Tarmac”, which pumps the brakes on the tempo, has a rolling seaside beat that doesn’t feel slow. With its Blues-tinged vocals, atmospheric instrumentals, and toe-tapping overtone, it’s a testament to In Bad Faith that its slowest track still stands out as so memorable.

Versatile, punchy, and irresistibly catchy, In Bad Faith is the perfect track for summer 2018.