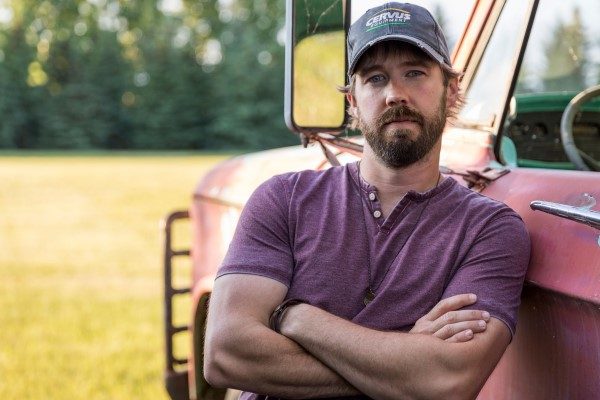 If you’ve never heard of country recording artist Drew Gregory, here’s your chance to get to know him a little better.

The songs on his new album Good Place to Start (being released on June 15) are infused with a down-home realism, a gritty honesty and vibrant sense of rootedness that comes from years spent working the land as a farmer – an aspect of his life that is deeply connected to his talent as a musician, singer and songwriter.

Check out the interview he did with us below to get to know him a little bit more.

For people who don’t know who you are, can you tell us a little more about yourself?

Well, I’m a farm kid from the small town of Standard Alberta. I grew up living just about every country song you hear on the radio so when I really started getting into music the country genre was the natural fit lyrically though my parents were big rock and roll fans so I think there’s a lot of that influence in my music as well. I feel like a very fortunate man to have 2 careers that I love so much with the music and the farming! I’m also a proud father of a wild 2-year-old boy, Ty, and married to one of the best gals you could ever find so I suppose you could say life is pretty good in my world right now!

Do you think your experience with working on a farm has helped shape who you are as a musician?

I think it definitely has a strong influence not only in my songs but in my career as a musician as well. Growing up on a farm and going to school in a small town teaches you everything rides on your reputation. If you get a bad one it’s really hard to shake and if you have a good one it can help you out a lot. Honesty and integrity big values for me and they are incredibly important in this business. If your songs aren’t honest people will hear it and if your business lacks integrity then you won’t last long!

Can you tell us a little about Good Place to Start?

I definitely get more and more comfortable with every album doing what I want to do and not what everyone else thinks I should do. I’ve never cut a song I hated but I have probably cut songs that weren’t perfect fits for me in the past. I think as I get older and understand myself a little better, I am figuring out what works really well for me and I feel very strongly that every song is a great fit this time around. We were also very fortunate to get funding through FACTOR to help with this which really helped open up the creative process in the studio. Instead of worrying whether or not to bring in another instrument due to cost we were able to really serve every song and give each one the treatment it needed which was a blast! This was the second album I’d done with Jason Barry and me and him had that added level of comfort after working on the last album together which also helped that creative process really flow!

What was the writing process while you were in Nashville? Did you have a set way of doing things?

I don’t think I’ve ever had a particular process for writing but I do know that I love writing with as many different writers with different styles as possible. When putting together an album I never want 2 songs to sound the same. I’ve been very fortunate to build some great relationships with some incredible writers and I always love allowing them to let the writing session flow whichever way they want it to go. I’m happy to roll with it and if, as the idea takes shape, the song seems like something I’d like to perform as an artist I make sure to insert things from my own life into it, and if it’s going another direction it’s always great to try to write songs for others!

Can you tell us a bit about how “Know Good” came about? What was the inspiration behind the song and the video?

I actually had a cancelled write one particular Friday when I was down in Nashville which always sucks when I’m only able to be there for a few weeks at a time. But I knew a fellow Canadian, Trinity Bradshaw, was in town as well so called her up to see if she wanted to get together for a last minute write. She was writing with the very talented Brad Stella, and they were kind enough to invite me to join them. We just wanted to do a really fun, don’t have to think too much, Friday afternoon kinda song. We didn’t even have the hook going in we just started jamming and Know Good is what we came up with. We wanted the video to match the feeling we had that Friday afternoon. That kinda “been a long week but the good times are coming’ feeling!

Do you get to be apart of the decision-making process when the video is in the creative stages?

We got to work with Dan Berdusco on the video who is extremely good at what he does so we let him send the first treatment and loved the whole idea. I think I made a few tweaks at that point but I would say most of the creative collaboration came the day of the shoot. We knew the rough idea of what we wanted to do but a lot of the fun stuff in the video, especially at the end, was just some on the spot ideas by either Dan or me. As anyone who works with horses knows, they don’t always co-operate but with not being too specific on the finer details of the video going in, we were able to make it all work really well with them and came up with things we may not have had it all gone according to plan. I love doing things on the fly like that and Dan was super laid back through the whole thing so it came together great!

What can we expect to see from you over the coming months?

With the release of the new album, the next few months are going to get crazy. We have a promotional trip planned going out across Canada in a whirlwind tour at the start of June. Then we release the album June 15 and don’t really have more than a few days off from shows in a row until September. Summer is always busy but this one is particularly amped up with new music coming out. We are very excited to be at Dauphin Country Fest for the first time, back and Country Thunder Alberta and back at Big Valley Jamboree and the always fun Calgary Stampede. It’s going to be a very wild but very fun few months!