Interview – Miesha and The Spanks 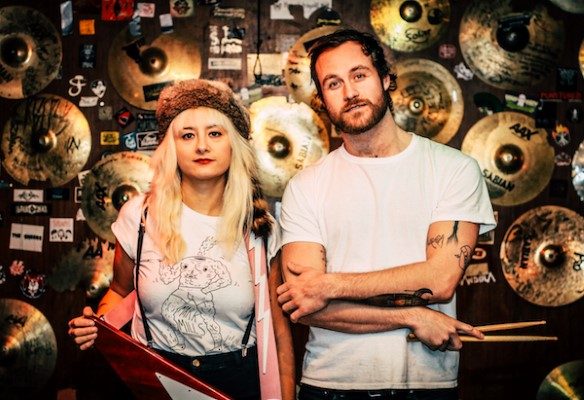 I got to hang out with Miesha and The Spanks, guitar-and-drum garage-rock duo, at Canadian music week. To be in the band you need “motivation, talent,” and a lightning shaped tattoo. We chatted about everything from drummer face to spanks and writing music in Garage Band.

First of all, can you introduce yourselves to our readers?

M: The best live photos of the band are of Sean.

It’s true. I’m a photographer and I’m always looking for the drummer face. So where does the name come from?

M: I had an idea to have an all-girl band called The Spanks when I was in high school, and I just kind of kept it in my pocket for use at a later date. I was in this punk band and when we broke up after three or four years we kind of had to rewrite all these songs and I couldn’t use anything I had done before, and I was like you know what? I just want a band name that’s mine and I’m going to throw my name on top and I’m going to use The Spanks. I didn’t know how many members I was going to have or what was going to happen with the project. I had the album recorded and the name before I had the band. When I played the first show only the drummer was available and I was like let’s just do it anyways, and it was awesome, and I was like “oh, I’m just going to stick to this.”

S: Now everyone’s always like “oh, so you’re Mr. Spanks. Lots of spanks” so I say “No, no, it’s spanks because it’s a memory of all the drummers that came before me. May they rest in peace.

M: There’s been a lot on all the albums I’ve done and all the 7 inches and stuff, there’s been a million people on it so those are all members of The Spanks. Anyone who ever recorded or performed live.

So I took a listen to your new LP, “Girls Girls Girls”, and it was super rad. Where did you get your inspiration from?

M: I’ve been writing that album slowly since about 2015. I started recording some songs with them, so I’ve got a few digital EPs that are older versions that totally end up changing on this album, but I’ve been working on it for a while, so it’s just been stuff I’ve been noticing in life. Most of my previous albums were specific love songs; I could name an album to a relationship. Now, I don’t know if I’m just getting old, but it’s more about just things in life. There are some love songs, too, because I just can’t help it, but Girls is kind of about my local girl gang and just giving all my love to them over anything else. Lost Boy is just my family history and the indigenous members of my family not ever meeting up with society and just kind of being left behind – lost essentially. So there’s a broader range of topics. It’s definitely not a concept album, each song kind of has its own story, which was a fun way to do it this time. The songs were paramount, we really developed each song individually.

I think that they flow together really well still; they sound really consistent.

M: Thanks, yeah I think our producers really lent to rounding it out while really working on each song on its own.

If you had to suggest for the readers to listen to one song off of the album, what would it be and why?

S: That’s one of my favourites.

M: It kind of crept up on me. It’s the weird one that I wrote on Garage Band and didn’t show Sean until we were in the studio.

S: It literally made the album on the last day it could’ve possibly. It was shown to me, and I had to write the drums in my head that night, go to the studio, and lay down the drums for it the next morning.

M: I didn’t even show the producers until that day either. I was like “well I’ve got this in my pocket, I don’t know.” Everyone was like “yeah, we’re doing it.” So it was one I was kind of weird about just the way I wrote it. Structurally it’s kind of different than the rest of them, right? But the more we’re playing it live I’m like that’s my guy, that’s my song right now.

Okay, now for the question I ask literally everyone. If you had to get a tattoo that represented your music, what would it be?

S: It’s our tour van with lightning bolts on it.

M: I have a lightning bolt. The lightning bolt’s kind of our thing that we’ve adopted. Mine says “true believer,” and I know I stole that from Stan Lee, but that’s part of my nerdy thing I say when posting or whatever, I call everybody “True Believers.” Our fans, our listeners, whoever’s on the other end is a “True Believer.”