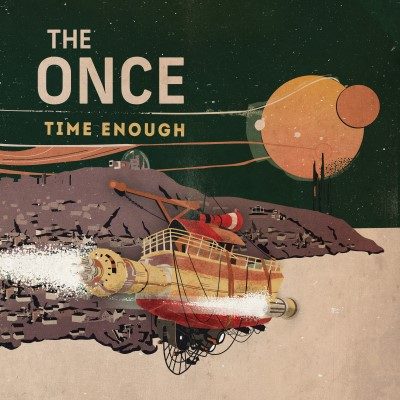 When I lived in Winnipeg, the boys and I would get together and jam. Acoustic guitars, drums now and then, Lucky Lager, and a lot of weed. We all came to music via different paths, but the most important thing, besides our love and friendship with one another, was the open-mindedness when it came to the music. If it wasn’t for the boys: amazing guitar player and audiophile Dana Kuzyk, Drummer and great rhythm guitar player Josh Vasas and another wonderful guitar player, Joe Boulard, I might have never heard or sung songs from bands that I claimed to loathe. It too brought my love of music to the table and so jamming songs from Radio Head to GG Allin, the best nights I ever had were singing songs that were never even on my radar. Cyndi Lauper, The Hip and The Headstones? Really? It was in that vein, the rejection of my own short-sightedness and ignorance that I reviewed Time Enough the fourth album from The Once and found myself again breaking through that tired zero-sum syllogism, “If you like a certain type of music then you must hate all the other types of music that don’t fit.”

The Once is Geraldine Hollett, Phil Churchill, and Andrew Dale. Time Enough is a collection of nine songs wonderfully produced, mixed and engineered by two-time ECMA producer of the year, Daniel Ledwell. His production has an overall feel that made me think of that great stone room type sound you get out of Robert Lang Studios (see any Seattle band you can think of). Geraldine Hollett’s voice is a beautifully contradictory instrument. Her voice is both contemporary and retro with a hint of Emmylou Harris. The backing vocals from Churchill and Dale add a choral nature to the songs with intricate harmonies all layered with a cornucopia of instrumentation. To put Time Enough in a hard-core east coast folk context, I was thinking about a band I love, out of New Brunswick, called Modabo and particularly their song “Sargasso” which, for me at the time, took harmony and folk to a level I had yet to hear. The Once takes it to a whole new level.

If I had to choose one word to describe Time Enough, the word would be: “Reflection.” And as I reflect on my notes, I see “Place Bands” by that I mean music from bands like Boston and Chicago in a very general sense and I see another band double underlined with exclamation points that I will reveal later. Time Enough is both a reminder of what you may have passed on the way and an introduction to a band with a wonderful new album which kicks off with “Can’t Live Without You” where “duality” is another word that keeps popping up in my notes. In the opening track, there’s a line “bend all the rules so nobody will lose” which made me wonder at the dissonance of being both innocent and experienced and how that meeting is always painful. The song has an urban retro vibe, with a fantastic acoustic guitar underlay and in what is a shocking but exciting change, “Before The Fall” follows as the second track. I loved the interplay between the vocals and what felt to me like a Beatles structure in its build-up to the chorus and in the bridge. Instead of call and response, I would say this track is more question and answer. The Once does not shy away from soundscapes. In “Any Other Way” the only word I wrote to describe the sound was “strange” where strange is good. This song, like the others, refuses to be any one type of thing. There are pop influences and an eighties inspired keyboard that really made the track sound thick which is then complemented by “Lead Me Lover” where a simple opening with guitar and keyboards leads into a song that had me thinking of U2 in the broadest sense again because the track refuses to be pigeonholed.

The highpoint of the album for me was the track “Another Morning” with great guitar picking, an uncluttered arrangement and Geraldine’s beautifully clear and unaffected voice. I know you’re wondering why I had Hank Williams Sr. in my notes. Well, this track, slowly building through the music, somehow feels like loss at the same time. The king of long gone and lonesome songs, Hank, would have recognized the genius of “Another Morning”. In “You Don’t Love Me” the familiarity of having all the relationship bullshit and noise in your head is on point. I was moved by the woman who sees right into the soul of a man, but that power and insight was lost for me in the harmonies and the arrangement. I would kill or love to hear this track stripped down to voice, percussion and guitar. The album continues with the radio-ready “Foreign Shore” and with “We Look Back” where, for me, the band is at its best. The vocals are right up front and the arrangement is tight, but I am not a fan of the wah-wah keyboard. The album ends strongly with “Some Lies” where the structure and the sophistication of the harmony had me thinking of the incredible and sadly defunct duo The Civil Wars. The song’s greatest strength is in its use of metaphor and allusion to convey the connections between people. The song also managed to make me feel surrounded by the ideas, lyrics, music and craft.

The Once reminded me that music is a universal collaboration and it can move you in ways you never expected. It’s both arrogant and ignorant to dismiss a band or genre of music as having nothing to offer. I am guilty of that and was reminded again that really great music can come to you from anywhere, from bands you never heard of, who were inspired by bands, musicians and genre’s that you put on the musical tire fire of “No Fuckin Way Am I Listening To That”. In the end, music always reminds you that in one way or another, since you put on your first favourite album, you were hearing music inspired by or ground in the very thing you claimed to “hate”.  So here in Vancouver tonight, The Once brought those wide open, collaborative Winnipeg jam sessions back to me and Time Enough opened a door on bands that I had thought shut. Earlier, I mentioned the heavy scrawl and double underlined band that listening to Time Enough reminded me of. This guy, me, the punk rock and metal guy had written and double underlined the name “Poco” remembering that “Keep On Trying” is one of my favorite songs, I love that song and The Once with Time Enough brought back something I had cherished but lost and introduced me to a music I hadn’t really heard before. Is there a better recommendation for an album than that?