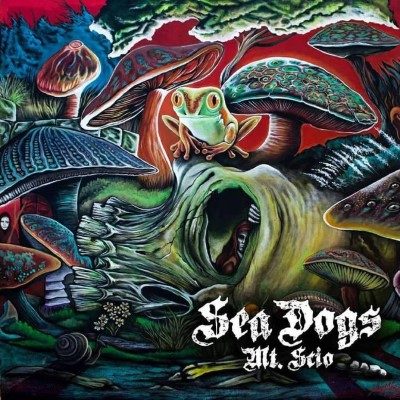 Earlier this month the Sea Dogs released their sophomore album, Mt. Scio. This came as a follow up to the 2015 release of their debut album, Dory of Souls.

Hailing from St. John’s, NL, the Sea Dogs consists of  Dale Drew (lead vocals), Dan Moore (guitars, vocals), Darren “Doc” Ried (guitars), Karl Hawkins (bass) and Jeff Devereaux (drums). They may have met by chance through the local music scene where all played a different role, but their eventual collaboration was fate.

The album starts strong with “Storm Maker”, using a mixture of guitar riffs with good grooves and drums to capture the attention of the listener. The vocals sit in a good place in the mix. There is an urgency felt through the guitar and drums that keep you wondering about what will happen next.

“Buddy, You’re Getting A Ticket”, is definitely a stand out for me. It starts with the fast-paced urgency that you get from most songs of the album, but throws in a cool tempo change in the middle that feels a lot like slamming on the breaks of a car and kind of coasting for a bit through some dark woods or something similar. The song is definitely a creative attention grabber that will help captivate the audience and leave them wanting more.

Another stand out for me was “On The Wall”. I had to stop for a minute when it began. The guitar riffs really stood out as something that wasn’t seen on other tracks. The tune is somewhat reminiscent of a hard rock tune with a heavy seventies funky vibe to it. You can’t help but move with the beat.

“Seasons” would be considered the ‘ballad’ of the album. With its softer, slowed down melody for most of the track. It is one that I can picture people swaying to. I especially like the repetition of the melody throughout the majority of the track.

The album ends with “Sink Or Swim”. The unique vocals and creative lyrics is what caught my attention on this track. It has a blues rock kind of sound, which closes out the album in a memorable way.

Mt. Scio  is an album that will capture the attention of many. With creative musical arrangements that keep you entranced to the anticipation of what song will play next, the Sea Dogs sure know how to incorporate a little something for everyone in the mix. The unique vocals and dynamic lyrics only add the icing to the cake. Each song is a new adventure, with a new story to be told. It is truly an album with a little something for everyone. So what are you waiting for? Go! Go! Go!