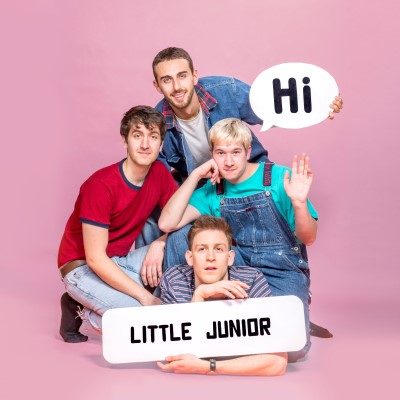 Toronto natives Little Junior released their debut album, interestingly titled Hi! on May 11th. I first heard of this band from their cover of Carly Rae-Jepsen’s “I Really Like You”, who also is one of the bands favourite musicians.

Taking inspiration from bands like The Pixies & Weezer, the band has used these influences to mould this album into what they wanted. Songs like “Denial” and “Accolades” show this kind of head moving, quick pop punk styles mixed together to make some new unique styles throughout the album.

The most notable song on the album is “Cry Baby”. The song was written about a moment where the lead singer Rane Elliott-Armstrong was talking to a sound engineer at a show that night where he made a homophobic remark. Since lead singer Elliott-Armstrong identifies as gay, this hit hard and inspired the song. It’s always an eye-opener finding out what inspired certain songs.

The last song “Unmotivated” is, in my opinion, a classic pop-punk song. It’s exactly like the title, a person who is unmotivated to do anything and doesn’t know why. Avoiding outings with friends, school events and more. It’s a song that I feel like everyone can relate too.

The final song on the album is their cover of “I Really Like You”. I didn’t really feel it at the beginning but once the chorus came in, I was loving the cover. Pop-Punk is fueled on covers and this one is an excellent example and a great way to end this overall great album.