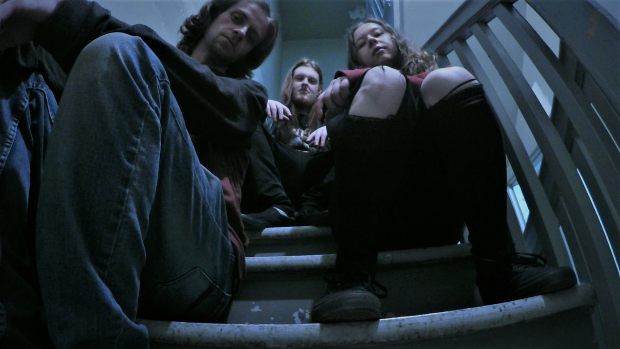 Hamilton, ON-based band, Doors & Fours are about to release their debut full-length album Generation Vex on June 8, 2018. In advance, they have released their single, “F*ck Me, I Love Death Metal”.  The video was produced by Aborted Productions and edited by Adam Peach. Find out more about this “metal(ly) punk” band in our Five Questions With below.

I’m Adam from Doors & Fours.  We play heavy rock & roll music.  We intended to start a punk rock band, but we also love metal so much that it worked its way in there, I guess.  Now we just call it rock & roll because we don’t really pay much attention to what or how we write.  Just doing it how we feel, and not catering to any specific crowd or genre, really.

Our music is pretty free-form in a sense that we don’t spend too much time calculating what should or shouldn’t be in a song.  We just feel it, play it, and if we don’t like it then maybe come back later when you’re in a different mood.  Sometimes forcing a part of a song can be the piece you end up hating later on because it’s not genuine.  Was overthought, or something, I don’t know lol.  We just like to be raw with our music.  I think people really appreciate real, raw music.  Like good ol’ rock & roll.

Our live show is very much as I described the album – raw, and uncalculated!   We play very hard and move around a lot.  I guess we figure if we’re not choking for dear life by the time we’re done than we haven’t really given you your money’s worth, now have we?  Some bands like to ask the crowd to move, we try to inspire them to move by example, I guess haha.  You will never get the same show.  We have written songs hours before hitting the stage before.  Playing live is our favourite time to test new songs, and also experiment with older ones.  We never keep the songs exactly.  They’re pretty close, but our songs evolve with time, in regards to playing them live.  Not all of them, of course, but there have been some.

We are touring Canada this summer in support of our debut full-length album, “Generation Vex”.  It will be released on June 8th (Spotify, apple music, Bandcamp etc, etc).  Our cd release party is June 8th at The Corktown Pub in Hamilton.

We are also in Barrie June 7th.  All of our current show listings can be found on Spotify or HERE.

That is a tough one for me but personally, I would say, “Take Your Life Away”.  Mostly because I feel like a lot of people would relate to that song a lot.  I used the concept of “death”, or “the grim reaper” coming to take you away as the old stories say.  I was inspired by the old black & white 60 ’s tv show “The Twilight Zone”.  The episode has an elderly man being visited by another man, calling himself “death”.  The idea is when the clock hits “your time to go”, “death” then walks you to your death.  It’s very grim, but I used this to describe a very harsh bout of depression in which the depression takes over so much, it destroys all life around you.  You come out of the deep depression, and everything is gone – as if you’d been robbed in your sleep or something.  I felt like the depression had come into my life, and just took everything – much like the grim reaper, in the twilight zone episode.

That is also a tough question because I like so many Canadian bands right now, it’s almost exclusively what I’m listening to haha.  I don’t want to say one favourite, but I suggest anyone reading this to check out Lizzy Boredom (Hamilton, ON), Voltang (also Hamilton), and Burning Spring (Niagara Falls).