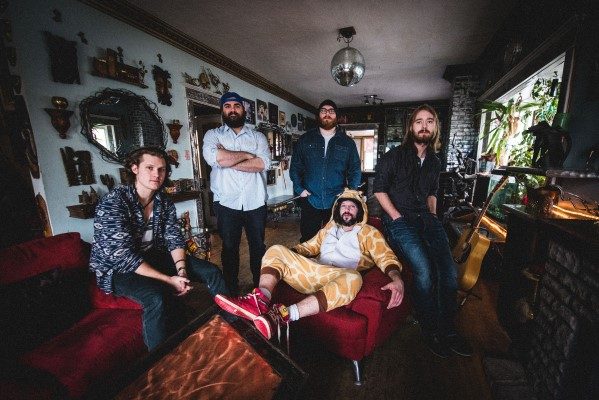 The Sheepdogs’ Leot Hanson and his powerhouse rock band, League of Wolves, are rolling into Toronto this May. Sweeping The Rivoli and The Dakota on May 10th and May 12th respectively, League of Wolves is hailed as bringing “the dark edge” back into rock n’ roll: riff-heavy, melody-driven, and crammed full of well-crafted vocals and guitar melodies, they’ve been taking the music scene by storm since 2015 with their track “Runaway”.

Having shared stages with renowned acts such as Public Animal, Yukon Blonde, The Trews, and Glorious Sons, it came as no surprise when they paired with producer Jacquire King (Modest Mouse, Kings of Leon, James Bay) to mix their single “You’re Killin’ Me”, which charted at #39 on the Active Rock Radio chart. Now, they have since been in the studio with Maia Davis (Mother Mother, One Bad Son) and Gavin Brown (Billy Talent, Three Days Grace) producing their highly-anticipated next album.

First off, thank you all very much for your time. How hyped are you to hit The Rivoli and The Dakota? Any words for anyone who hasn’t bought their tickets yet?

Are there tickets for sale? I thought they were showcases… haha. Welp someone’s making money!

If I can ask, what has it been like in the studio with Davis and Brown?

It’s like falling into wet cement, hopefully, the permanent outcome is something everyone will look at for a while.

Have any of you worked with either of them before, and how did that collaboration come about?

I’ve known Maia from back in the day of touring and through the industry, great gal, good writer! With Gavin, I had just heard the rumblings through the industry about him as a musician and writer. Maia had reached out to me about what I was working on and more so just to touch base. I started sending here demos or songs and she seemed to like them and wanting to come for a writing session. The rest is history.

How has the experience so far differed from past sessions?

We have a modest studio in Piapot, Sask that we would do our recordings or demos beforehand. This was a complete step up going into a very polished and pro studio. There are pros and cons to both, we all really liked working at Noble Studios, however.

Now, your track “Runaway” was a fantastic romp. “You’re Killin’ Me” felt grittier. With this mysterious upcoming album, are you expecting your sound to be tweaked yet again?

“Runaway” was an older one before my time in the band but a great song no less. “You’re Killing Me” definitely showcases more the direction we wanted to head. I feel like contemporary music is heading into a very produced pop stature, with many hooks and melodies. I guess we are doing the same but trying to show that good melody/hooks can still be dark, edgy or dirty in this age today.

Speaking of the album’s mysteriousness, can you give any hints concerning its possible release date?

Really no idea… Fall perhaps if no one dies.

Do any of you have a favourite track off the upcoming album yet, and could you even vaguely hint at which one it might be?

They are all my favourite, and yours!

Switching gears, what was your favourite show that you played last summer?

I don’t really have a calendar in front of me but I would say probably something in Saskatoon?

And other than your two upcoming Toronto shows, what other events do you have lined up for 2018 so far?

We have some festival shows in and around western Canada so far. We are hoping to be adding more dates to the fall as well. I hope to sit around a campfire at some point as well. haha.

Finally, any last words concerning the album, your upcoming shows, or both?

I guess it’s just superb to know that people are still willing to invest in R’n’R. This is more a big shout out or thanks to anyone & everyone on board supporting the League of Wolves through our little journey into the Rock and Rock realm!