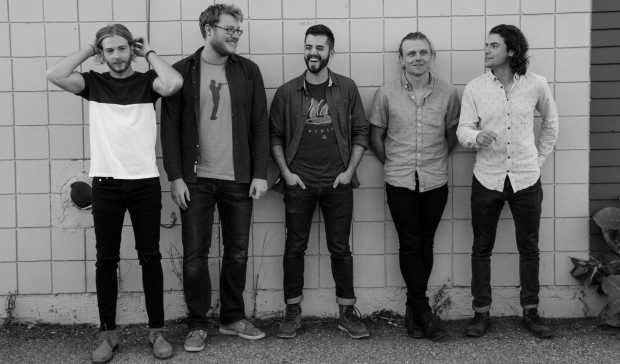 Recently I had the opportunity to listen to Ten Minute Detour’s sophomore album Common Pleasure and ask lead man, Andrew Shier about the band, their recording process, their musical influences, the new album, and many numerical, and space, based questions.  Dig in!

Thank you for taking the time to answer questions today!

Congratulations on the newest release!  Common Pleasure is a sonically rich record!

Reflecting on the hundreds of shows you have played over the last few years, as you make your way to perform for 2018’s Canadian Music Week at the Junction City Music Hall on May 09th, what stands out as a favourite performance or tour highlight?

I think one of the coolest shows for us was playing the Coke Stage at the Calgary Stampede. It was one of our first outdoor shows, in our hometown, so it was a much different vibe than playing in a club. It was also a blistering 35 degrees and sunny – I never realized how hard it is to see the lights on your pedal board when the sun is shining. Live and learn I guess.

The new album Common Pleasure is wonderfully recorded and produced, with clear distinct levels, and creative tone choices, between the vocals, instruments and percussion.   What was it like working with producer Lincoln Parish (formerly of Cage the Elephant) and recording in historic music city Nashville?

Lincoln has a very calming presence, in that he trusts us as musicians to play the songs and he doesn’t get too picky about arrangement or tones. When he hears something he wants to change, he’ll bring it up but ultimately the decision is up to the room. His whole thing is capturing the energy in the room first, then we can discuss icing the cake afterwards.

Nashville has been awesome to us, so much so that one of the songs on our album, ‘Nashville Geographic’, is about our trip down to meet Lincoln a year prior. It’s a very welcoming city, not too big, but still, this awesome energy to it, being so entrenched historically in music. We were also lucky enough to stay in this log cabin in the woods just outside of the city, so we were able to unwind after every session and leave everything in the studio.

What was the inspiration behind the title of the album Common Pleasure?

We were looking for album names that capture the album as a whole and weren’t getting anywhere. So we looked at lyrics and one of the lines in ‘Taste’ is “This is the age of common pleasure”. That stood out as a name, and I think it speaks to the album and its accessibility. There are some heavier songs in ‘Poli Shore’ and ‘One for you, One for me’, a southern rock style ballad in ‘McNally’s’, a sort of retro vibe in ‘Betty’. There’s really something for everyone.

The opening track “Betty” is a solid alt. pop-rock tune with an old school soulful vocal delivery.  Describe your collective musical influences and how they affect your songwriting.

I think we all grew up listening to different stuff. I grew up in Burlington, ON and listened to a lot of grunge and metal; Pearl Jam, RHCP, Metallica…Jordan and Mike also shared different musical interests as well. I think it’s a big advantage being able to dip into all these musical influences, and being able to share ideas that aren’t already a part of our musical catalogue. I think the toughest part is honing in on a song and letting the song take you where it needs to go, rather than making it sound like something it’s not.

If “Betty” was ever developed into a full-length movie or on-going series, who would you cast as the main character Betty?

Marion Cotillard. She’s got a real classic look to her and she can act.

If you could book your ultimate opening performance, if time and history was not a factor, what would be your dream opening gig and why?

Personally, I’d love to play with Vedder and Cornell. They were two of my biggest idols growing up, so I think some dingy club in Seattle with Temple of The Dog in the early 90’s. But that’s just me. I think we’d all want something different.

In one of your promo photos, there is a silhouette of a trumpet player on a t-shirt.  The pose looks exactly like Miles Davis from Sketches of Spain, whereas the body type and outfit looks like Wynton Marsalis.  Is it Wynton Marsalis dressed (or perhaps cosplaying) as Miles Davis for a Sketches of Spain tribute album, or completely unrelated?   If anyone in Ten Minute Detour was going to cosplay as another famous musician, who would it be?

It is in fact Wynton – but no dressing up or anything.

If Ten Minute Detour created their all-time favourite Top Ten List of songs, what would be in the top three?

Hmm..tough one. Based on what we listen to on the road…I’d say there’d be a Tame Impala song. Maybe a Raconteurs song? And let’s say something by the Beatles. I know it’s a cop out… That’s too hard, next question!

If Ten Minute Detour recorded a song with Ten Second Epic, what would it be called and how long would the song be?

By extension, if you recorded a concept record with Ten Second Epic, what would be the storyline of the album?  A time-traveller that can only move forward or back in time in increments of ten seconds or ten minutes, perhaps?

If Ten Minute Detour, Ten Second Epic, and Thirty Seconds to Mars organized a worldwide tour, what would the tagline for the tour be?

If the Starship Salvation (look it up, so good!)  takes off from platform A using a Ten Second Epic countdown to make a Thirty Second to Mars trip, while taking a Ten Minute Detour around Venus, at what speed would the rocket ship be travelling to make the entire trip both ways at a constant speed?

Navigation seems pretty simple with Google maps and such, I’m sure they’ll have SpaceMaps by then so we’ll take that. Never heard of Letters From Pluto so they can take entertainment. Jared Leto was in Blade Runner and I’m sure he did extensive research on his role and must have crossed intergalactic engineering at some point…so he’s engineer.

Anything else to plug?  Any upcoming Ten Minute Detour info readers should take a ten second detour to read?

We have our last show of our ‘Common Pleasure’ Tour this Wednesday, May 9th at The Junction City Music Hall in Toronto. Other than that, give us a spin online and follow us on Spotify for any new releases.

Thanks for the time and working through the numerical, and space, themed questions!  Congratulations on Common Pleasure and break a leg at the upcoming CMW showcase on May 9th!

Thanks again for your TIME.