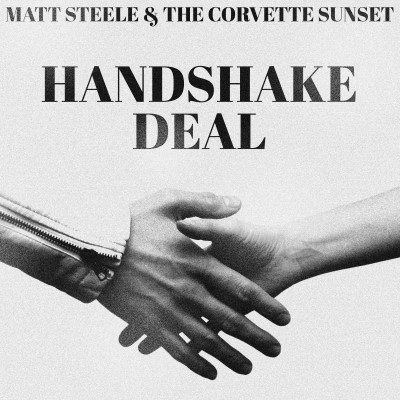 Halifax-based pop/rockers Matt Steele & The Corvette Sunset have unveiled a music video for their new single, “Handshake Deal”. The song is off of the band’s upcoming album, Half Girl Half Ghost which is set for release on June 7, 2018. The album is to be released digitally, as well as CD and Vinyl and will be available for streaming & purchasing on the band’s website.

The song is catchy, and almost impossible not to sing along with. They actually provide the lyrics on their YouTube, so you really have no excuse, sing along with them! The dance moves are also a highlight of the video. I personally would love to see this song performed live, especially if it includes Matt’s “Elvis-esque swagger”.

Matt shares on the song & video,

“I feel like when relationships go south you go through these different stages, from grief to finally dusting yourself off and singing something like “shananana hey hey goodbye”. I wrote this tune in the first stage but the band helped me make it more like a vaccine against misguided second thoughts – “This was a messed up situation and don’t let them fool you twice!” Regarding the video itself, I’m so proud of the fun stage presence we’ve developed and I think (Director) Jeff Miller did a great job of capturing that energy – I love nothing more than doing silly rock ‘n roll dance moves!”