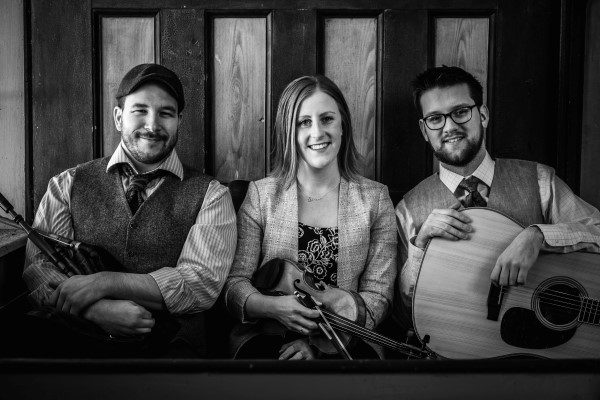 Cape Breton’s Ben & Anita (Ben Miller & Anita MacDonald) are set to release their album, South Haven on May 11, 2018, but all of the Canadian Beats readers are lucky enough to catch our advanced stream of the release. Joining them on this project is Zakk Cormier, a talented multi-instrumentalist with deep roots in the Acadian community of Prince Edward Island.

As a trio, these three East Coast artists create a powerful sound, transcending the boundaries between Cape Breton, Scottish, and Acadian traditions.

We are a pipe and fiddle-driven Celtic duo, currently living in Halifax, NS. Ben is originally from Upstate New York and I am from Cape Breton. Ben and I met at the 2013 Celtic Colours International Festival and have been playing music together ever since! As well as performing as a duo, we also tour as a trio with Acadian multi-instrumentalist, Zakk Cormier. Zakk is a dynamic musician with deep roots in the musical community of Prince Edward Island. In the trio, Zakk adds brilliant elements of guitar accompaniment, along with the driving rhythm of Acadian foot-percussion. We have been steadily touring as a trio for the past year with Zakk and are set to release our new album, “South Haven,” under the name Miller | MacDonald | Cormier.

When the three of us work together, we each bring a different part of the culture here in the Maritimes to the table. I grew up in Cape Breton and I was heavily influenced by the fiddle tradition there, Ben spent many years living in Scotland and spent a lot of time studying the music from the Western Isles. Zakk grew up with in Prince Edward Island and brings a whole wealth of Acadian traditions to the table. As Miller | MacDonald | Cormier, we are looking to bridge the gap between these three traditions – Acadian, Scottish, and Cape Breton – creating a new sound that is bigger than the sum of its parts.

In support of the new album, we are very excited to be doing shows across the Maritimes, Ontario, and New York.

For more information on our upcoming shows, visit www.benandanita.com.

As the trio, we focus on the instrumental tradition. Most of it is dance music, but we also play slower airs from our various traditions as well. In addition to the instrumentals, we incorporate Gaelic Song and step-dancing in our live shows. We feel like we have really created a unique sound and a blend of New World and Old World influences. Scotland’s Piping Today Magazine has described us as: “Fiery…Fresh…yet totally traditional.”

We think the last track on the album, “Fowler on the Moor,” perfectly sums up the album. It showcases the synergy between the pipes and fiddle, while really highlighting Zakk’s dynamic style of guitar accompaniment, and finishes with the driving groove of Acadian foot percussion! For those that are more into vocals, Alasdair nan Stòp is great for demonstrating the connection between the instrumental and vocal sides of the Gaelic tradition here in Nova Scotia.

We are constantly influenced by so many great Canadian artists. At the moment, we are really inspired by the way so many of our friends and colleagues are creating new sounds in traditional and roots music, while still showing a deep respect for the traditions they come from – Vishten, André Brunet, Andrea Beaton, Ten Strings and a Goatskin, and Cassie and Maggie MacDonald, just to name a few.