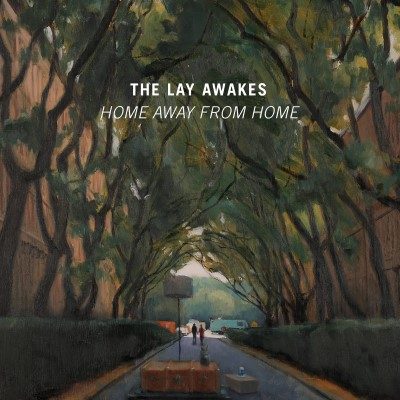 The Lay Awakes, a singer-songwriter duo based out of Brooklyn, NY (with roots in the Canadian prairies and small-town Ontario), are back with the release of their album Home Away From Home.

The backstory to this duo is definitely one for the books. Some may call it coincidence, but I feel like it was fate. Anna Paddock and Patrick Anderson, not only partners in music but in life as well, met by chance at a wedding. Both found common ground on the fact that they were both aspiring musicians and had a similar destination in mind after the wedding. It was only suiting that they decided to travel together. According to the duo,  “it’s not the only way to fall in love, but it’s a good one.  The pause and go rhythms of a captivating story, westbound sunsets over prairie skies, the majesty of the Rockies, the twists and turns of the purple Coastal Mountains, and finally the long, powerful, inevitable rush of the Fraser River, all contributed to a dizzying and life-changing adventure.”

One of the neat things about the album is that they share the lead vocals. Patrick appears as lead on a few songs, with backing vocals thrown in amongst the others. But more often it is Anna’s beautiful voice that takes the lead. “It is a voice that, particularly on the soft, more atmospheric songs, is at once darkly sweet, and then instantly light and quiet as if she were right beside you.”

The first track, and single, from the album is “Falling In Love”. This ballad is full of emotional melodies, as Patrick sings about the process of falling in love. The dreamy tone leaves you feeling as if you are floating on a cloud, similar to how one feels when they first fall in love. The song is Patrick’s take on the early days, weeks, and months of their relationship. “He readily admits that it broke the mold from his normal, more methodical songwriting process, as he was swept up in the power of the moment.”

“Stanley” takes another approach. This more upbeat tune leaves you wanting to tap along to the beat. The lyrics seem to be written as a letter to their child, telling the child all the things that they wish for them and that everything will be alright. It is fitting that both Anna and Patrick lend their vocals to this beautifully written song.

“Home Away From Home” is fuelled with emotion, both in the melody and the lyrics. It is almost as if they are baring their souls for each other, and everyone else, to see. It seems to tell us that no matter where we are, as long as we are together everything will be alright. This is definitely one of my favourite songs on the album.

According to the duo, “Babe Are You Sure” is one of the “quietly immersive songs that displays Anna’s ability to almost whisper her words. And, as with any good song, the real meaning can be left up to the listener. While coming across as a heart to heart between lovers, it is actually about an equally powerful relationships – that between sisters.”

“Press Play” is definitely the stand out for me. They took a different spin to the music of this song and added some creative pieces. It has a darker tone and leans more towards their pop side than others. “It’s up-tempo enthusiasm and up-to-the-second production vibe bely the serious message of the lyrics. This is a song about escape. And also about that  New York feeling where you feel like you belong only because no one really belongs; you’re in the shuffle, your days are fast and restless, but the subway brings everyone to the same place. Right next to each other. Rich and poor. Ugly and pretty. Old and Young. Most people choose to Press Play.” If you only listen to one song to the album, make sure that this is the one!

This album is one that you will definitely want to take the time to listen. Through the beautifully written lyrics with a story to tell and music that tugs on many emotions, The Lay Awakes want to share their story with the world. Are you ready to listen?