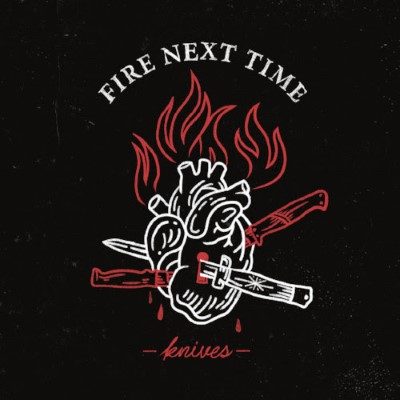 Edmonton’s Fire Next Time swagger onward in their decade-long journey of southern-tinged punk rock with their latest offering, Knives.

“Wanderlust” kicks off with ferocity, an eclectic ‘banger rooted in place by the obvious tightness of this group. “Party Foul” chugs along, the two sides of partying hard evident in the lyrical narrative, while the band slams away in the background. “Collars” features an almost pirate-like delivery of vocals, the entire tune seems to sway, sometimes Celtic in feel, sometimes more southern as the mood demands. “Old Scratch” borrows Johnny Cash’s “Ring of Fire” melody almost entirely.  “Walking Blind” kicks in more restrainedly, feeling almost bluesy and anthemic. A tinge of piano in the bridge is a nice touch, breaking away slightly from the manic punk rock. “Bethlehem” takes it’s time building to its peak, whereupon it breaks its much quicker main section, illustrating a broader scope to FNT’s sound, a rounded caste of sound. “A Jameson Fracture” is raw and gritty, lyrics spat (knuckles presumably bruised). Third from last, “Hurry Up and Wait” drawls with contempt and roughness, “make a toast to our disgrace”. “Birch Wood” screams throughout, its chorus in particular very strong, another anthemic quality to the Knives record. Closing out the album is “Critical Fail”. Immediately evident is a grating vocal harmony, filling out already strong voice work, before Fire Next Time slam into their quintessential headbanging grind.

A tight band that has crafted their signature sound and ride their beaten path, strong as ever.