Home / Albums / Review – Across The Board

Review – Across The Board 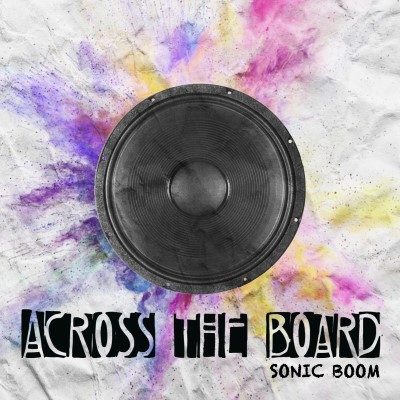 Canadian rock band, Across The Board (ATB) releases their album, Sonic Boom, on May 4th. Sonic Boom highlights the highs and lows of the journey to success that many may take throughout their lives.

ATB is composed of Jacqueline Auguste (vocals/keys/string) and Andy Ramjattan (bass guitar), with the aid of supporting musicians Jessica Speziale (backing vocals), Martin Heller (Keys), and Kurt Dickson (drums). ATB was “forged from garage jams and basement Youtube sessions.” Little did they know the success that was soon to follow.

According to the band, Sonic Boom is considered to be “a story of the musical journey of a small town indie artist as she navigates her way through this noisy music industry to realize that the only way to succeed is to believe in yourself and create your best art.” Each song has its own story to tell.

It was written as “a rock opera, with a heroine, an anticlimax and a revelation.” Auguste penned much of the album during the band’s cross-Canada train tour. According to Auguste, she “imagined what it would really take to make it in this music industry… not only the sheer strength and unrelenting work we need to make a mark amidst all the noise but the importance of writing great music that resonates with our fans.”

The album beings with “Sonic Boom”, an uplifting track that radiates positivity. Whether it be the lyrics, the creative use of vocals, or the layering of the guitars to create a catchy melody, this is a track that will capture the attention of the audience. According to the band, ‘Sonic Boom’ describes “the dream of a successful music career and sets the stage for the journey,” as evident through the lyrics “No one’s gonna stand in my way, take the sun from my day, try to rain on my parade – can you hear my sonic boom?!”

My personal favourite is “It Shouldn’t Be This Hard”. There is great use of the acoustic guitars on the verses, with the addition of an electric guitar to add the feeling of intensity during the chorus. The backing vocals add a nice touch to the song as well, increasing the intense feeling of the track. According to ATB, this track explains that not every adventure is without difficulty as Auguste retells meeting “the scammers and the crooks in the music industry and attempts to rise above the deception.”

“No Curtain Call” is stripped down, intimate song that simply uses acoustic guitar and vocals to appeal to the emotion of the listener. The emotion can be heard throughout Auguste’s vocals, as she recounts what it is like playing the last song in a small bar during any given night. According to ATB, this track is likely the “most heart-wrenching and emotional points of the album – the song transports the listener into a small Ontario bar, where patrons are chatting instinctively in the background, paying little attention to the artist, as she realizes that not every cloud has a silver lining.”

The album finishes with “Two Step”, a tune with an interesting start that will definitely capture the attention of the audience. With the creative use of instruments in the background and effects to build up the intensity at the beginning to a point of high energy, this one is sure to be a hit. I especially enjoy the break in the middle of the track, where music slows (before building back up). This is definitely a song that would be great live, as the grand finale with audience participation. According to ATB, this track (written by Darnell Toth and Jessica Speziale) “provides the perfect finale of strength, resolve, championship and victory to conclude the story.” This description sums it up nicely.

Since breaking into the music scene a few years back and releasing their debut album Jane On Fire last year, ATB has been pretty successful. With their single ‘Indifference’ to be “their first track to hit the FM radio waves and launch them to a number one spot on the Reverbnation charts in Canada” and winning the “Akademia Music Award for best pop/rock/Americana song in 2016”, Across The Board are sure to have another great album under their belt. So what are you waiting for, go check it out!