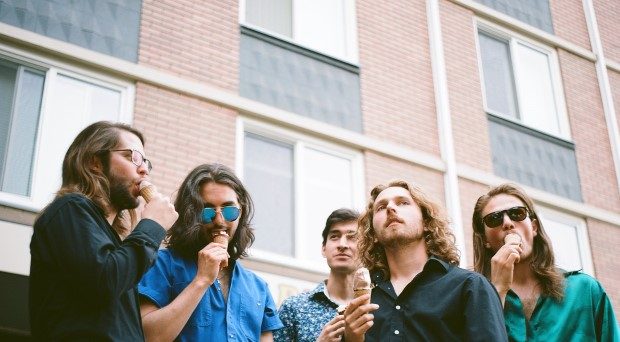 Edmonton, AB-based Carter & the Capitals have released a lyric video for their single, “One Step From Magic”. The video was hand-drawn and animated by a local artist, Molly Little. The track was co-produced and recorded with Ben Kaplan (Five Alarm Funk, Mother Mother, Biffy Clyro) at Vancouver’s Fader Mountain Sound. This is the first single released off of their upcoming debut album, due out in 2019. Check it out below, and find out more about Carter & the Capitals in our Five Questions With segment.

We’re a high energy five-piece funk/soul group from Edmonton, Alberta. Since forming in 2015, we’ve been consistently building our audience throughout Western Canada with live performances, earworm singles, and videos. We’ve supported Busty & the Bass, Har Mar Superstar, and Five Alarm Funk multiple times. We are also in the process of recording our debut full-length album with producer Ben Kaplan, expected in 2019. This song, “One Step From Magic”, is the first single off of the record.

We write groovy, danceable music, pulling from all eras of funk, soul, and pop to create tight, focused, and tasty jams. We’re known for our signature, hard-driving sound, soulful vocals, and catchy instrumental riffs, which we get by fusing the most danceable elements of the pop and funk genres. This single showcases a smoother 80’s R’n’B vibe, whereas our next single will have more of a 70’s funk-rock vibe. Our original material might bring to mind artists such as Prince, James Brown, and Bruno Mars and never fails to pack the dancefloor.

Anyone seeing us live can expect some seriously bangin’ grooves, soulful vocals from the whole band, and plenty of hair flips and fancy shirts. We love to mix things up and show our depth of influences, but our #1 goal is always getting the audience dancing!

This one! At least until our next song comes out!

We love Jacksoul and Remy Shand, true throwback Canadian R’n’B. Not to mention Rhonda Smith, Prince’s former bass player, is from Halifax! But there are some great contemporary artists doing it too, like Busty & the Bass, The Brooks, Daniel Caesar, and Joanna Borromeo. Plus, we all enjoy music from other genres too, so there’s plenty of Daniel Romano, The Velveteins, Robi Botos, and whatever else we might be into on that day!