Five Questions With The Dungarees 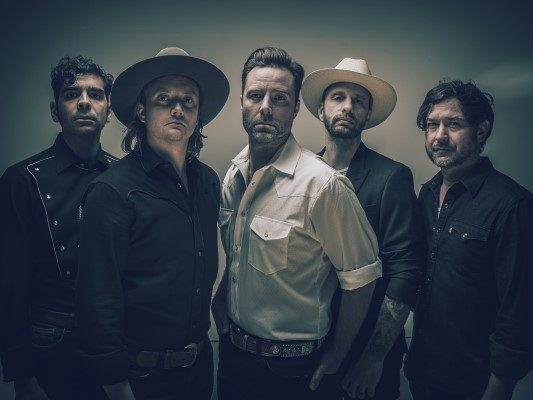 Edmonton based band, The Dungarees have released their new single, “Don’t Hold Back” along with a video to accompany the release. On top of this, the band has also been nominated for three Edmonton Music Awards. Check out the video below, and find out more about The Dungarees in our segment of Five Questions With.

We all make Edmonton our home but originally hail from as far as Yukon and Ontario. We are five guys that come from a wide variety of musical background with one common denominator, that we were raised on classic country. We’ve all been playing for many years in different bands and incarnations. James was signed and has had a successful solo career; Robb was in the Prairie-country band, The Wheatpool. Kiron and Darrek have played in many popular bands over the years. Benny has played drums with The Boom Chucka Boys and before that toured the world with pop-punk band, Social Code.

Our varied backgrounds all converge to create the sound of The Dungarees.

We are passionate about what we do and would like to consider ourselves hard-working guys. Honesty and integrity are really important to us in our music. We won’t let placating or cliché lyrics slide. We write and play on our songs and we scrutinize any song pitched to us. What you see is what you get. Each of us contributes to what The Dungarees sound like. We have a type of brotherhood that allows us to share a vision and keeps us driven to healthy competition with one another. Always pushing each other to up our game. It’s what keeps us fresh and motivated.

Because there are three writers in the band, we find that songs can evolve from either a co-writing situation or one member will arrive with the song and allow the band to flesh out the parts. In the end, the band has a great deal of influence on how a song will sound regardless of whether it was written by one member, three members or in the rare case of producing a song that was pitched to us.

We love melodic pop hooks and try to incorporate them wherever possible but the meat and potatoes of all our songs is classic, gritty country. The instrumentation is raw. We have a pedal steel guitar and twangy telecaster riffs. We play with heart. Our tone is more influenced by 80’s and 90’s country more than slick, modern rock. We walk a fine line of blending new and old songwriting styles. It’s integral to the sound of the band. We would liken ourselves to a band like a balsy-er Midland or Eric Church with 5 Eric Churches…

Anyone who has seen a Dungarees show knows that we leave it all up on the stage in a sweaty mess. High-octane, gritty country. Big, Eagles-style harmonies. Shredding, chickin’ pickin’ guitar solos and pedal steel guitar, like real country should have.

Our summer is filling up with some really awesome shows. We just returned from a 3-week tour in Australia where we were headlining country festivals. It’s awesome to see how popular country music is down there.

Fans may have seen us on stages across Canada at Boots and Hearts, Big Valley Jamboree, Country Thunder Etc. We’ve also opened for Reba, Blake Shelton, Dwight Yoakam and Miranda Lambert over the years.

We’ll be announcing some big tour dates in the near future.

That’s a tough one. But if we had to choose just one I suppose we’d have to ask our fans to listen to the newest one, Don’t Hold Back. We recorded a bunch of songs that we are really excited about, at the same recording session as Don’t Hold Back with Juno winning producer, Russell Broom. We have an awesome working relationship with Russell. He really brings the best out of us.
An artist is always hoping that their audience connects with their newest musical offering. Of course, it would be awesome to eventually have a back catalogue of huge hits. We’re working on it!

We’re loving Colter Wall’s new record. What a voice! Altameda is an awesome roots-rock band from Edmonton. And of course, we’d wanna give a shoutout to our pals in Nice Horse. Their songs are infectious. JJ Shiplett is one helluva songwriter.