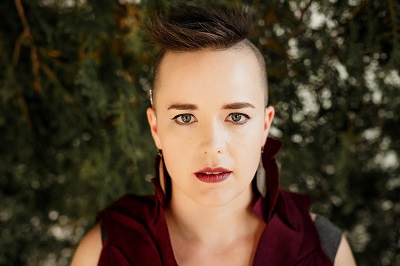 It is always exciting to be introduced to new music from an artist I haven’t heard of before. You can learn a lot about them from their music before you ever meet them. Such is the case with Winnipeg singer/songwriter Raine Hamilton.

Considered a Folk artist, Hamilton is so much more than this. Her life has been surrounded by many genres of music and in her writing they all come out in beautiful ways. Her second full-length album, Night Sky, was released March 23rd with two singles having been released prior to give us a taste of what was to come – “Starlight” (March 9th, 2018) and “Lift Me Up” (released late 2017).

To celebrate the release of the new album, Hamilton performed live at The West End Cultural Centre on March 24th. An interesting inclusion to this show was the addition of American Sign Language (ASL) interpretation throughout the performance. On April 4th, she embarked on a Canadian Tour begining in Saskatoon. We met up with her in Toronto for this interview and to catch her at a house concert. It was a delight to spend time with her and talk about her music.