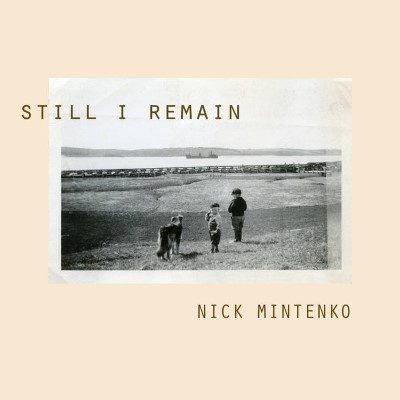 For the past 30 odd years, I have had a running argument with a friend about Peter Gabriel. His claim is that Peter Gabriel is a genius whereas mine is, I liked him in Genesis and his solo album productions are so slick, so well done, so perfect that they make me feel…nothing. I don’t argue about his genius but Peter grates on me precisely because his albums are slick productions that sound amazing but lack the flats of Kris Kristofferson or the sharps of Johnny Cash, the rough changes of Willie Nelson and that whole Bakersfield California and Texas crew who eschewed the string arrangements and sequin suits of Nashville, believing in the dictum of Buck Owens that less was more.

When I started listening to Nick Mintenko‘s sophomore album, Still I Remain, That old argument about Peter Gabriel rattled around in my head for awhile. The album sounds great, the production is outstanding, the musicians are all first order and on top of their craft. Nick’s vocal range is astonishing and he uses it to full advantage in the ten songs on Still I Remain yet here I am on a Tuesday night finding it difficult to beat down a lifetime bias toward great song mixes and production when throughout my entire life I consider Red Headed Stranger the pinnacle of production and Kris Kristofferson’s Sunday Morning Coming Down with its rough edges, rough vocals and craft all left on the album as a display of genius. Nick Mintenko may not have converted me but he made me realize that there is a depth and an independent spirit in the grooves of a well-produced album that shines in the mix without any pretension or falsity and that gives his album grace.

I usually include some blow by blow analysis of the tracks and this will be no different as I was left with both questions and observations of Still I Remain. With any album, I try not to read the press material I get with the email. I listen to the album until I feel on solid ground with what I write. Nick Mintenko’s particular style may not have my heart pounding like the first time I heard Steve Earle, Guy Clarke, JJ Grey and the incredible awe-inspiring talent of local talent, Ben Rogers, but that is simply my own personal preference. I am not, in any way, cutting down Still I Remain and you could consider the fact that I enjoyed this album so thoroughly as to be as high a compliment as I can muster. The album begins with the track “If Nothing Else”. The song was not what I was expecting but I live for those moments. It was like the first time I listened to Infectious Grooves expecting a Suicidal Tendencies skate punk album and was blown away by the obvious influence that Jaco Pastorious had on bassist Rob Trujillo and how versatile Mike Muir could be. So I came to like what I wrote in my notes as “weird kind of a song”  with a fantastic hook that reminded me of The Band. I kept asking “is Nick British? He sounds British.” The vocals were a little flat in spots but I like the fact it was left on the recording. Courage and craft are evident in this song.

Nick uses a lot of instruments on this record and “She Talked While Singing” feels like a mission statement. “This is how we roll on Hornby bro.” If there isn’t a capo on the guitar in this track I would be astounded but the high tone matches Nick’s voice and blends well despite a busy arrangement. I loved the line “Like a magnet on a fridge I’m stuck to you.” The track itself has a  John Mayer feel to it. The title track “Still I remain” has wonderful harmonies and a jolty rhythm. The keyboards are on point and the band is tight. The song has a ska light groove and I enjoyed the idea of a young man staying grounded in a kinetic world. “Heartbeat” follows and should have been my favourite track on the album. Nick uses his extraordinary vocals to convey movement as well as changes in tempo. This is where the production got to me. There’s so much going on in this song that it made it difficult to focus on the lead guitar’s interplay with the vocals. Nick is fearless in his exploration of genre and the track “Attention” has a wonderful jazzy feel. The drummer is in the pocket on this track which has a great riff, a really solid bass line with fills by the keyboard that gives this track a sense of wonder.  The album continues with “Always Strong” which has a David Usher or an even stronger Dave Matthews flavour as it blends a multi-rhythmic flow complete with a Tim Reynold’s-esque guitar solo. In “Cat and Mouse” the line “an ultra-violent game of chess” is brilliant. The guitar fills on this track are great and the sound is modern. I may be off my nut but it seems to me that the women in his songs all seem demure, soft and idealized in a way that obscures who they might be. I am forty-five years old and listening to this after so many failures in relationships, some my fault, some not, I recognize the guy in these songs who sees himself reflected in the objects of his affections and I keep wondering what does the guy think when he looks into the mirror and into his own eyes? I am reminded of line 38a in Plato’s Apology where Socrates states “the unexamined life is not worth living.” So, I find myself wanting to know what the artist thinks when confronted with himself, by himself in that private moment that is both a birth and a death. My question through this song and others is, “how does this man see himself?” That may go a little deep but the album invites this kind of reckoning and is a massive draw into the experience of Still I Remain.

Still I Remain finishes with three strong songs. “Tender Eyes” had me thinking of The Beatles’ Rubber Soul. Perhaps the best song on the album is a beautifully crafted song from the heart “What A Word Is Future” this track is founded in love and sincerity. There is a beautiful flow around muted keyboards. The song has an innocence and idealism that never approaches the mawkish, ironic or saccharine. It goes straight ahead with love and without the false sentimentality that permeates much of our lives and culture. The final track “Home” was exactly what I was hoping for from a young artist. I felt it was the first time Nick is introspective, filled with questions, unsure of the answers and seeking truth. It leaves the listener, or me anyway, with a sense of Nick’s emotional growth, maturity and honesty and it leaves that path wide open for exploration as Nick continues his journey through music and life.

Share this:
Related ItemsFolkNick MintenkoStill I Remain
← Previous Story Review – Thom Coombes
Next Story → Review – Across The Board