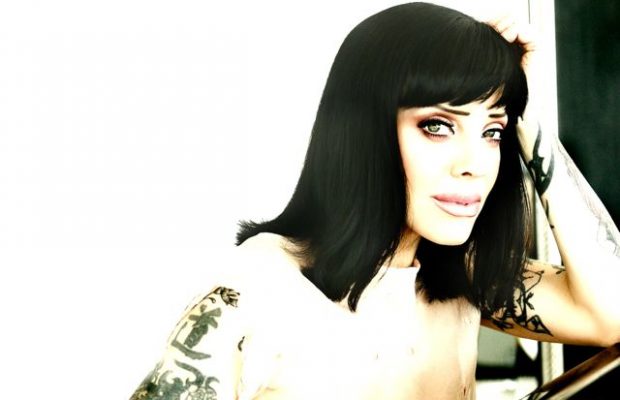 Canadian rock star, writer, and humanitarian, Bif Naked, uses art to push boundaries and stand up for what she believes in. It seems like Bif’s talents are never-ending, and all of her artwork stems from the experiences she has in her everyday life. This week, we got to sit down and chat with her about all things Bif, from her memoire “I, Bificus,” to interestingly juxtaposed tattoos.

Sure! My name is Bif, I am a singer and I have been basically doing the same job since I was 18 as a performer.

Tell us a little bit about your memoire “I, Bificus”. What inspired you to write it? What kind of stories are in it?

I never really meant to write one, I was asked to do it primarily because of my – because of my breast cancer that I had been dealing with and surviving. It was kind of embarrassing; I didn’t really think that I was going to write a memoir. I felt a little young. I didn’t feel I was going to die or that it was necessary, but my manager encouraged me and then I started to process trying to write it. It took about three and a half years and I just wrote the story of my childhood prompted by a variety of questions about how I’m an adopted kid and why my parents were in India – what it was like growing up as the only Canadian in my family – a variety of questions that seemed to inspire me to write a lot about my parents. They were civil rights activists in the United States and were very involved in the civil rights movement and I had a great interest in that. I was really proud of them, so I definitely wanted to include that and talk about it. I talk about my dog because I just am a dog person. I just focus on their lives and their deaths and what that was like and moving forward. There were a few stories about touring and my career, but a lot of it’s very, very personal.

Where do you draw inspiration from for your music and writing? Do things you experience and things you write about in your memoir seep into your songs in any way?

Oh certainly, I mean I guess we all kind of do. We all go through are heartbroken, and then we probably write a song about it or we’re heartbroken or pining for someone. When my parents got divorced and my father remarried I wrote a song about that, which was on my first record called “I Was Getting Married.” I guess just life experiences and anything that comes my way definitely serves me for lyrical inspiration.

As someone who identifies as LGBT, I find it really inspiring and important to have people like you in the music industry who are unafraid and unashamed of who they are. What kind of advice do you have for your LGBT fans?

Oh wow, I could say so much, I mean first and foremost all I can ever do is try and be a good and very positive ally for everyone. When I was a young person, definitely I oscillated, I was really back and forth with my own love interests in my life. It was just something that never really occurred to me as something that would hold me back. I never shied away from identifying as a bi person or trying to encourage people to love whoever they want. I never thought I should be gender specific, and I was a bit carefree. As I got older I developed a good old habit for monogamy, and I kept getting married. And now I’m married to a most wonderful man who happens to be my guitar player. We were laughing the other day because I don’t actually think I have any straight friends. Everybody struggles. Everybody lives cheque to cheque. There are so many different stigmas that are attached to people; there are so many barriers in our modern world. I just try to encourage everybody to just be nice to each other, compassionate, empathetic, and understanding and to educate themselves. The best way to be an ally is to stop talking and listen. If people can be better listeners they’ll be better allys. I give everybody a shot at basically spreading their love, whatever direction it comes from and whatever direction it’s going.

If you could get a tattoo influenced by your music, what would it be and why?

Oh my god. I don’t know, literally the face of my dog, I don’t know. I have so many tattoos. Honestly, I’m obsessed with My Little Pony. I don’t know why, because all I want to do is listen to really loud, raging, hard music. For me, I think that it was always important to be in an aggressive sounding band. I think that was partly because of my introduction to music and the age that I was. All my friends who were in music were these really tough guys in these really tough punk bands, and the only way I felt I could be respected was to be equally as tough. That worked until I opened my mouth on stage, and I talked in my high-pitched voice, not my growly lady voice. We always used to laugh because Care Bear was really popular, so I’d wear Care Bear t-shirts when we would have these shows that had raging, aggressive, violent mosh pits. I really loved the juxtaposition of that, so I think I would get a pentagram or some kind of terribly frightening, satanic thing with a little kitten in the middle. That would be the most perfect tattoo.