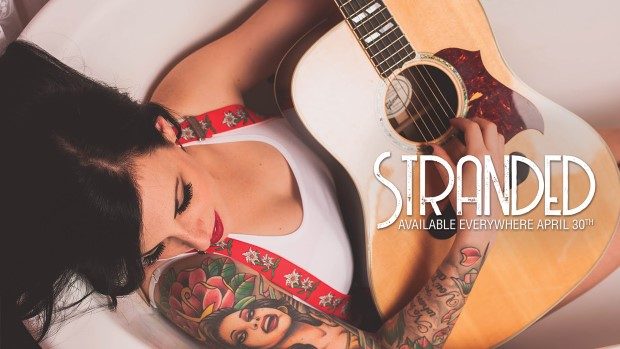 Fort McMurray’s own Becca Hess is an up & coming Canadian country artist that you should definitely check out. She has just released the first single, “Stranded” from her upcoming sophomore album, Truth.

“This song for me is such wonderfully happy anthem about finally finding that one person you could be lost forever with and never look back,” describes Becca. “It came to me at that time in my life, so singing it allows me the luxury of reliving those incredible butterfly moments of falling for the one you’ve been waiting so long for.”

Give the lyric video a peek below, and find out more about Becca in our Five Questions With.

My name is Becca Hess and I am a Canadian country music singer-songwriter from Abbotsford, BC. I divide my time in the industry between performing as a recording artist and producing live music events across Western Canada including the Rockin’ River Music Festival in Merritt, BC. “Stranded” is my brand new single, my 5th song released to Canadian radio, but the first off of my sophomore album “Truth” which is set to release this fall!

I was raised with the classics – Merle, George, Lefty – touring with my Dad selling CD’s for him as a kid and memorizing every line of these amazing old heartache songs, the real country stuff. If it wasn’t those guys it was Elton John, Skip Ewing, Shelby Lynn, Garth, Vince Gill. That has definitely influenced how I write just as it influenced my Dad. I could write heartache all day long – so the challenge was always to find a way to write upbeat, fun radio singles without losing the importance of a well-written song. “Mountain Child” was released last year and I think it did that for me – it has some fire though, where “Stranded” is much sweeter. I think Stranded is a perfect summer song and shows a softer side and a much happier side of love. Whether I am honouring the country classics or infusing some 90’s nostalgia I seem to always tip my hat to the past in everything I write.

The live show is where I really get to show what I’m made of. I think entertaining is such a massive part of what we do, it’s often overlooked, and honestly, it’s so much fun. I always try to bring a lot of energy to the stage by mixing in some killer covers outside of the country genre that’ll pack the dance floor. I am so lucky to play with some of Canada’s best players that I could pretty much just show up and nap and people would still be like, ya that band was awesome! I’ll be playing the Ponoka Stampede coming up on Canada Day weekend and heading up to my home away from home June 7-9th – Fort McMurray! I spent 10 years in the mac and cannot wait to get back up to the Boomtown Casino to do a big reunion show. Fort McMurray always has such a great crowd, they definitely know how to have a good time.

Ah! The dreaded question, much like “pick your favourite kid!” (although they all have a favourite kid, let’s be honest) At first, I always want to suggest one of my ballads, like “Truth” or “Here’s To Us” – y’know just strap on that emotional knapsack right out of the gate haha. But I think to get the best overall feel, I would suggest “Mountain Child” – It’s one that sort of kicks the door in, and as a female artist I think it’s a pretty cool thing to have a song with some muscle that isn’t about a bar or a boy.

Man, we have some serious talent in this country it is so hard to choose. First off, the female content is through the roof – hometown girl Madeline Merlo is a goddess and deserves every bit of success coming her way, Jessica Mitchell is an incredible writer with a stunning voice, Leaving Thomas are phenomenally talented and of course One More Girl – Carly co-produced this album, and she is an absolute force. One of the most driven and talented people I have ever known AND she’s sickeningly beautiful – that whole McKillip family is one big collection of talents.

I think Brett Kissel is one of the best entertainers out there – he is the nicest guy alive, so talented. Aaron Goodvin is another amazing entertainer, a killer voice and an unbelievable writer – he wrote “If I Can’t” off the new record with my old man, I think it’s an absolute smash.

Outside of the country world I grew up listening to a lot of Jann Arden – another Canadian treasure – Justin Nozuka who I think finds the most beautiful melodies and chord progressions, and of course, the QUEEN Celine – still one of the best voices of all time.

Thank you so much for chatting with me, I hope you love STRANDED as much as I do!