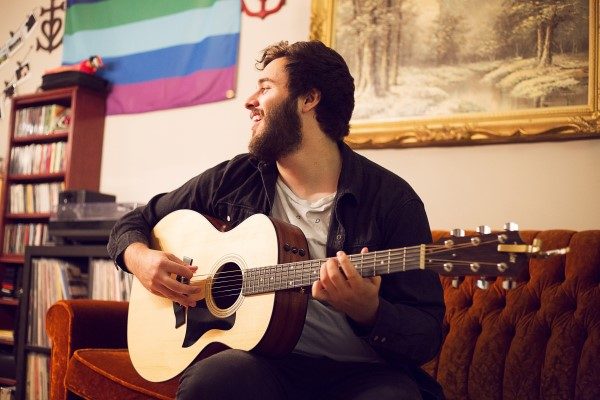 Guilhem Martinez knows music. May it be writing or recording it with his band, Lost Love or helping found Pouzza Fest earlier in the decade, he’s got all of his bases covered! Considering the music festival’s name comes from combining the deliciousness of poutine and pizza, you have to assume he knows a thing or two about great food, too.

You’ve recorded a new album with your band as well as you perform solo but you also work in the music festival world with Pouzza Fest! Where did the original idea for that come from to start working with Pouzza? Does being in a band help what you do for Pouzza?

I was 19 when I moved to Montreal and it was exactly when the first Pouzza was taking place (May 2011). I’ve always been playing in bands and when I moved to Montreal, I wanted to get involved with the “scene”. So, the year after, I was volunteering for Pouzza. My job was to drive around the “bigger” bands and I loved it. I was pretty impressed also. Anyway, Hugo knew me a little bit because I booked his band when I was 14 in my hometown and for Pouzza 3, I started to be more involved with Pouzza. That’s when I started to book for the festival. Always on a volunteer basis. In 2015, Hugo and Helene (who are the 2 co-founders of the festival) asked a few people they trusted if they wanted to get involved with Pouzza because they didn’t want to keep on doing Pouzza if they had to bear the whole weight of it on their shoulders. I mean… Pouzza is not making any money and even though some people don’t believe that, it’s always been about trying to make a fun festival for everyone. In 2015, I was still at school, so I didn’t have any money. However, I’m lucky enough to have parents who paid for my university years, so I was able to get a student loan, just to become a shareholder of Pouzza and somehow, save Pouzza from an imminent death. Since then, we’ve all been a happy Pouzza family and everything goes way smoother now that we’re a bunch of people handling everything.

As for the second question, I try not to mix my band and Pouzza. I don’t like having people telling me “I helped your band, get me on Pouzza” or “You didn’t get my band on Pouzza, I won’t help your band!”. And I get a lot of those.

What do you hope is different with Pouzza Fest than the many other music festivals out there?

The first thing I thought when I read the question was the number of bands with only men in them. White dudes with beards. It’s a “classic” for that genre of “punk”. However, with Pouzza, we try to include as many bands with people that are not men. I think with Pouzza 8, we have 35% of the bands that have at least one member of the band that isn’t a man. It’s pretty overwhelming to see all those festivals with 95%+ bands that only include men. We think this whole music thing should be inclusive to everyone.

Also, the second thing I thought when I read the question was that Pouzza is a great mix of small “new” bands to discover and bigger bands that you already knew and enjoyed. I think it’s important to go from a venue to another and to find out about new bands.

Finally, we have a really cool outdoor site and I think we should enjoy it while we still have the chance to do it there. Support the festival, buy a pass, buy some beers and buy some merch.

What would you say are the biggest differences between when Pouzza Fest started back in 2011 to today? How has it grown?

Everything is going more smoothly. Even if it grew bigger, I think everyone knows what they have to do and our volunteers totally nail it every year. We could run this festival without all the volunteers.

Tell us about your new album. What are the top three feelings you want an audience to leave with after seeing you perform live?

The new album is a journey through the eyes of a very busy gentleman who would like to throw everything away and become a dog because dogs are better than humans and their lives can be much cooler and stressless than ours.

Top 3 feelings after seeing us:

1. “Wow… Lost Love sounds a lot like Weezer/Jeff Rosenstock now… I wonder if it’s on purpose or …?!”

2. “The music was catchy and the smiles on the faces of all the band members made me wanna smile too. I don’t know why it’s called Lost Love though. They should just be called “Lovely”.

3. “I like their shirts. Those guys surely have a great stylist”

What’s your favourite part of expressing yourself with music?

The myriad of meanings a song can have depends on who’s listening to it.

What are you most looking forward to in the next six months?

Playing those new songs live. Going back to Europe with Lost Love and doing solo shows. Playing Pouzza in Montreal, Booze Cruise Fest in Hamburg and The Fest in Gainesville.