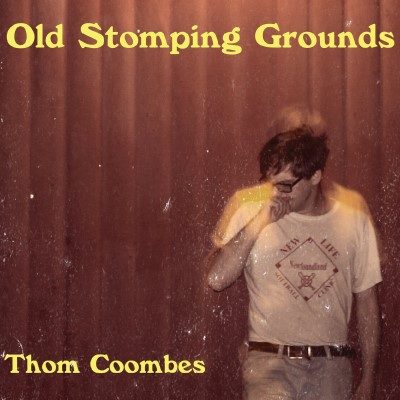 Canadian singer, songwriter, and serial collaborator Thom Coombes released his most recent album, Old Stomping Grounds, in June 2017. In his own words, Coombes forms “makeshift bands on the fly” with his friends, a philosophy which was instrumental in the production of Old Stomping Grounds.

The finished product features Canadian folk legend Al Tuck on guest vocals, as well as up-and-coming artists like Laura Jean Fraser (The Attempted Murder), Steve Maloney (The Wandering Kind), Len O’Neil (Green and Gold), and Aley Waterman (Gala). With so many different and varied talents coming together there can be the very real concern that the album could lack a sense of cohesion. Surprisingly, this is not the case.

“Follow the Coast” and “Above the Flood” have a folksy inspiration, with the former erring more towards mellow and the latter almost forlorn. From there, things gradually transition into something closer to country with tracks like “Tourist Town in Winter” which feature more upbeat guitars and soft vocal harmonies. The album later shifts back through to that folk sound, but there are a several discernible through-lines that connect each track: the first is the East coast sound. Hailing from Newfoundland, Coombes’ music is suffused with a feeling of Canadiana that cannot be mimicked. Perhaps more importantly though are Coombes’ lyrics. They are blunt, silly, and clever enough to warrant several close listens to pick up on his wordplay.

Coombes describes this album as both a “wake and wedding,” a place for these songs to die for the artist and come to life for the listener. It has a bittersweet undercurrent like the last day of summer when you know that you are about to grow up and are putting your childhood away before you move on. Old Stomping Grounds manages to convey this with a relaxed reminiscence that speaks to Coombes’ talent at expressing these emotions in music.