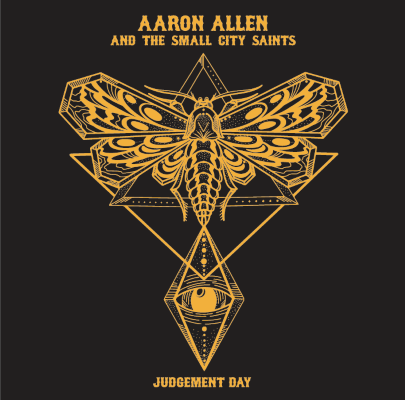 Aaron Allen & The Small City Saints have released their latest album, Judgement Day, a follow up to the 2015 release, Better Days.

One of the things we’ve always been preached is to never judge a book by its cover. That is what you need to remember when taking the first glimpse of this band. According to the band, “Although Allen reveres country music’s legends, he isn’t by any stretch a traditionalist. With much of his body inked, he doesn’t immediately resemble most people’s image of a country singer. But from the moment he kicks his band into gear and launches into one of the new album’s signature tracks, ‘Rambling Man,’ there’s no questioning his authenticity or conviction.”

The album begins with “Whiskey On My Mind”, a track with a strong country rock feel with the right amount of twang. The backing vocals are a great addition to the song, adding a layer of softness to the rugged main vocals. ‘Cold Shoulder’ follows the same suit, with the addition of a rockabilly feel. It is definitely one that keeps you tapping along to the beat.

“Rambling Man” was released as the first single from the album in early April. This song was written about drummer Archie Gamble. According to Allen, “He’s (Gamble) been on the road for over 30 years, and I have a ton of respect for his commitment. Music is everything to him and he’s put all else aside to achieve his dream. I’ve spoken with him many times about how the scene has changed. He’s been through a lot of tough times, but for him, it’s been a hell of a ride that he would never trade for anything in the world.” Channelling these conversations, the song feels like it has motion, with an intensity that makes it seem like we are on the move. The melody carries a train motif through the click/clack of the beat on the drums. The addition of the fiddle adds that something extra to capture the attention of the audience.

“Lucky Man” takes a different approach, becoming the first ballad on the album. The melody slows as Allen sings a tale that comes across as a ballad for the working class – “spending most of days in a factory, it’s gonna kill but it’s all that I can do to provide.” The lyrics to this song is something that can strike home with many listeners.The album ends with ‘The Good Ones’- a softer, emotional song. Allen seems to be baring his soul, singing the heartfelt tale of missing someone who is no longer around. This is something that many of the listeners can sympathize with, as it leaves a somber feeling throughout.

Throughout Judgement Day, “Allen boldly staking out his own territory by drawing from his own experiences.” From upbeat songs that make you want to move along to the beat to those emotion-filled tracks that tug at the heartstrings, Aaron Allen & The Small City Saints include it all. If you are a fan of Country music, then this is an album you don’t want to miss.