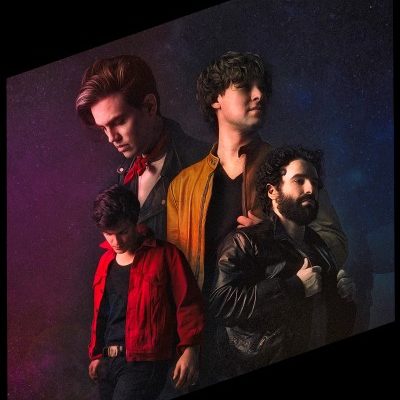 Toronto’s pop-rock quartet, Jane’s Party have released a video for their single, “You’re The Light”. The single serves as the first sneak peek from a new Jane’s Party full-length expected later this summer. The track was written in collaboration with the band’s good friend Matthew Angus (Fast Romantics) and is now available to stream or purchase HERE.

The band’s very own Tom Ionescu oversaw art direction on the video.

“The video showcases a variety of light-based environments, each exploring the dynamic between light-medium and the musicians. Each “world” – as we called them – possesses innate contrasting qualities that vary deeply in the way it allows musicians to operate within them. The red silhouette world reduces the space to just two dimensions, while the “forest of lights” creates a complex three-dimensional environment.”

The band has already unveiled a very special B-side cover of Gerry Rafferty’s 1978 hit, “Right Down The Line” featuring DJ Skratch Bastid (aka Paul Murphy). Listen to the track HERE. Murphy shares on the collab,

“Jane’s Party brought me a rough cover of ‘Right Down The Line’ and I loved it. They wanted me to add something to it, so I tried to imagine what it would have been like to be the first one to write that song, singing and playing along to a vintage drum machine and then layering on top of that. We kind of reverse engineered the 70s singer-songwriter process.”