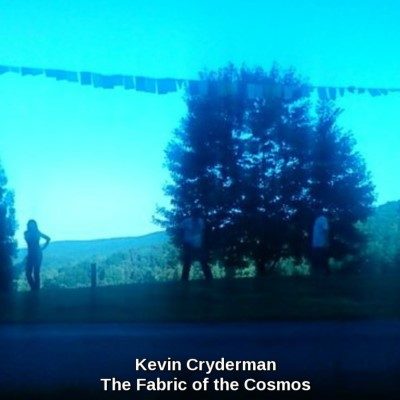 Kevin Cryderman released his third album The Fabric of the Cosmos in February. The album has influences of multiple music genres from Alternative Rock, to Pop and even World. Cryderman has claimed that this album is an unusual and creative take on musical genres.

The first song on the album “Lawn Chairs” shows Cryderman’s unique vocals. His true skill with guitar work displays well in this song as it has a pop-folk feel to it, perfect to make a crowd move at a live performance. “Burn It Down” is a more mellow song. It could easily be mistaken for a song by Tom Petty as the vocals, guitar work (especially the solo) and creative lyrics are very common to Pettys works.

“Letters From India” was a track Cryderman wanted people to focus on. It was a good choice as Cryderman’s excellent vocal range and lyrical work are very well displayed on this track. Just his voice and an acoustic guitar hit more emotional chords than any song I’ve heard in a while.

“Teflon Girl” was a surprising addition, as it is a heavier based song. The drums are a strong focus on this as they sound more like an alternative rock band, something like Smashing Pumpkins, which with Cryderman’s voice makes this very closely related to the bands biggest hits.

Be prepared for the final track though. “Visions of the Daughters of Albion” is a 10-minute epic which has great electric & acoustic works, along with Cryderman’s vocals. About halfway through the song, it picks up quick adding in some percussion elements, while at the end it slows down with a beautiful ending.

Cryderman is truly showing he is a man of multiple talents with this album. If you’re a fan of any kind of alternative rock music, this album is a must hear for you. Cryderman has released a great set of songs and everyone should give them a chance.