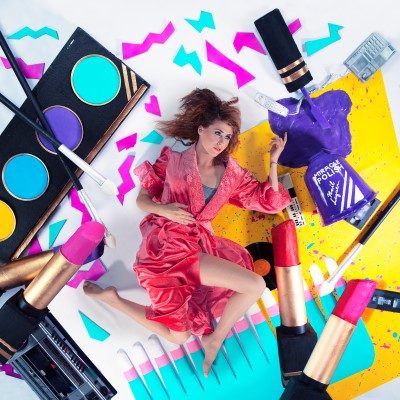 Bossie released her much-anticipated debut LP NOT PICTURED this week. This LP comes two years after the release of her first single “Meteor” which received acclaim from top outlets such as Noisey, DIY, and NME. This rollout plan has been one that has kept us waiting (too long) but the final product has proven to be one that was worth holding out for.

The collection feels like a satirical take on the trivial social pressures faced by millennials. From social media obsession, prolonged teenage-hood, and just the overall anxiety of “becoming something”, Bossie makes a generation feel like she understands them. While the lyrical theme feels very millennial, the beats and production cross all of our favourite musical decades. We hear a seamless fusion of 80’s new wave synth, 90’s rom-com vocals, and a sprinkle of today’s catchiest pop stars. Bossie manages to stir together our favourite aspects of the past three decades into a mixture of glam-pop perfection. Releasing this LP right before summer is a smart move with Bossie’s catchy melodies and bubble-gum sounds she’ll have this album blasted on any summer playlist worth listening to.

Her debut single “Meteor” is inescapably catchy and makes you want to jump around your bedroom singing into a hairbrush à la 90’s rom-com. A music video was released alongside this track that gives us Bossie at centre-stage being doused in glitter, feathers, confetti, and just about any other piece of glam-party material that could be thrown in her direction. The video also contained cameos from members of fellow Ontario acts Tokyo Police Club, Hollerado, and July Talk.

Giving us 80’s new wave perfection we then have “Strawberry Moon” which opens like a Joy Division or New Order track. Laid on top of these influences you then have Bossie’s bubble-gum pop vocals, pulling you out from the 80’s and into subsequent decades.

“A Lot Like Love” is a track that has Bossie making fun of herself and her fellow millennials for how preoccupied we all are with obtaining social media acceptance. In a cheeky way, the track pokes fun at the seeming friendships and connections you form via socials and how this vain pursuit plays an excessively important role in our lives.

“As Good As It Gets” opens like a St. Vincent track with Bossie then adding her candy-pop flair to it. Similar in sound, we then have “Tell It All” which is about the unsettling notion of losing your childhood memories as you get older. Given its playful and upbeat delivery, you wouldn’t notice that this is actually the most introspective track off the album.

The LP closes out with “Post Teen”, a track that speaks to anyone in their 20’s trying to figure out how to navigate through the world of adulthood. The track makes references to the death of DVDs, Project Free TV, student debt, and various other generational markers, giving its listeners a sense of collectivity and comradery with Bossie.

Hello, my name is Sarah Armiento and I dabble in many different areas of the Montreal music world (AND beyond). By day I am a music publicist, band manager and aspiring bass-player-for-80s-covers-only and by night I do booking and promotion for an underground venue in my neighbourhood. I also never stop trying to be cool on Twitter.