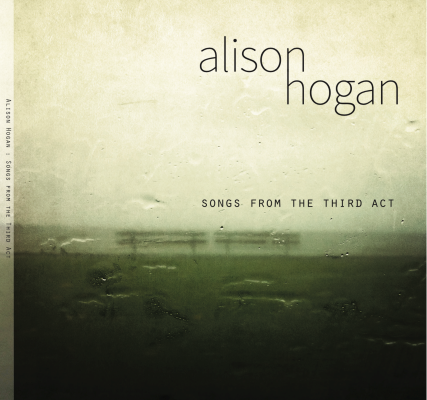 The very best of folk music evokes a feeling, not of nostalgia for, but a reckoning with a place and time that is lost to us. Those people old enough to remember Vancouver before the world was invited for Expo 86, would have described the city as a place you could live, afford, raise a family and at the same time, share space with and openly welcome those living on the margins, and hanging on the edge. Vancouver was a place where weirdness was not only accepted but cherished, even prized as a “Never mind him, he’s from Vancouver” badge of honour that was co-opted, hijacked and molded into something ugly and unrecognizable. Alison Hogan‘s third album of thirteen tracks: Songs From The Third Act is a reminder of what the west coast used to be; the memory of a city that cared about local artists, and celebrated local arts. Songs From The Third Act is a stunning, sad, funny, sexy and lovely collection of songs. I made a few first observations while listening, trying to connect the dots between Alison Hogan’s music and my love of folk music. The overall feel and style made me think of Blue Rodeo, Rickie Lee Jones, Alison Krauss and, in the case of the sixth track, my favourite, “Doin’ All Right” Guy Clark, like “Man, Guy Clark could have written this song.” It has the same wonderful feel as Clark’s “Out In The Parking Lot.” Alison’s acoustic lead is great. And Charlie Hase’s dobro and pedal steel are top shelf. (Jerry Douglas dobro good.) Alison’s line “Cheap beer and Stetsons and Maybelline stares” is both funny and poignant in a folk singers lament to being boxed in by genre and the expectations of an audience.

The album opens on a completely different note, however, with the first track “All The Kings Horses.” The danger of a song like this is to slip into a maudlin clichéd stereotype but Alison writes about love in a very real way. The song is both painful and hopeful and I liked the allusion of humpty dumpty to the fragility of love and relationships and how damaging carelessness can be. The line “eyes the colour of old blue jeans” killed me as it portrayed an emotionally unavailable but not unlikeable man. There is a great bridge on this track and I love the  Cajun soul of the accordion or as a street musician friend of mine in New Brunswick calls it: ”Dat Acordeen”

You get great musical whiplash from the second  blues laden track “Laundromat Man.” This is a low down and dirty blues song, and while Alison’s voice slid sensually all over the song, I kept thinking of Bonnie Raitt. The honky-tonk piano is played with jazz talent and the slide guitar is right out of the Warren Haynes playbook. The song feels like it is straight up old school Kitsilano and is sexy as hell.

“Hearts On Fire” follows “Laundromat Man” and I loved the line “hearts on fire, leave more than ashes behind.” The song has a Rickie Lee Jones and Cowboy Junkies vibe and the song itself feels like it bends down into the canyon which Alison sings of. I had a problem with the “doo doo doo” on the fade out, but that is just a personal bias where I think, unless you’re Marvin Gaye, Smokey Robinson or The Temptations, you shouldn’t. “Charlie’s Tune” follows “Hearts On Fire” and is the most personal and vulnerable track on the album. With a wonderful rhyme scheme that is more poetic then lyric, the song is a  beautiful lament and reminded me of the brilliant and underappreciated Garnet Rogers.

The album only misses on two tracks. The first one is “Mama Cries” It’s the first song that feels like fiction and clichéd. The lyrics skip along the surface with a generic Nashville music row feel that doesn’t have the same depth as the other tracks. The other miss is Alison’s cover of “Far From Me” which is a John Prine song and Prine’s lyric “ain’t it funny how an old broken bottle can look just like a diamond ring” is one of the best lines ever written to music. The miss, for me, comes from the emotionality in the song. With Prine, you always feel that he’s laughing at himself because he has this amazing insight yet chooses to go down in flames anyway. Alison’s cover doesn’t have that same wry and knowing smile that Prine has. (But nobody except John Prine does) The album gets all the way back on track with the closing songs. In “Pinto Pony” there is a beautiful interplay between voice and guitar and Alison Hogan’s virtuosity is on full display the subject matter doesn’t matter as much as this incredible interplay. The album ends with “Charlie’s Song Reprise” I felt in the reprise there was a better mix that the vocals were right up front and not buried in the wash. Songs From Third Act is not your typical folk album, it goes beyond a generic genre label with the same intense introspection, empathy, honesty and craft that Townes Van Zandt defined and dared anyone to emulate. Few do. Alison Hogan does.