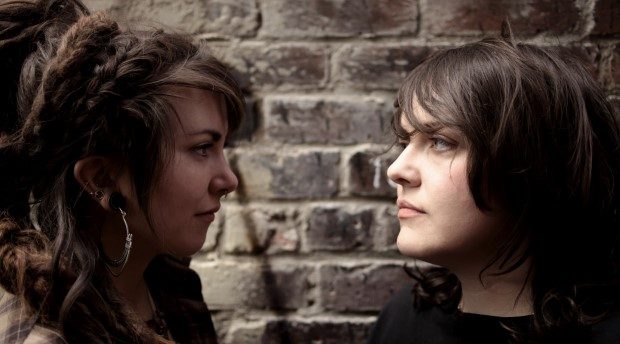 Nova Scotia’s own folk duo, Mama’s Broke is made up of Lisa Marie & Amy Lou. The two are nominated in the Rising Star Recording of the Year category at the 2018 ECMAs for their release, Count the Wicked. We were happy to catch up with the ladies of Mama’s Broke to chat about the nomination, live performance and so much more.

Also, take a few minutes and check out the video for “Revulsion (Black Bile)”. Give it a listen, and find out more about Mama’s Broke below.

We are Amy Lou and Lisa Maria, and we are a duo called Mama’s Broke.

It was really exciting when we found out. Amy is from Nova Scotia and has been surrounded by amazing East Coast musicians her whole life so it was a special honour for us to be recognized by the ECMA along with some incredible talent.

We’re most excited to see the other artists perform. Also to meet lots of new people that are involved in the east coast music community.

We are performing at the Seahorse Tavern.

We create a very full and rich sound for being just two people. There’s a lot of different representations of tradition in our performance. From podorythmie, to fiddlesticks, to acapella ballads. All the while the energy can be both intricate and heavy, as well as darker than most people are used to at a ‘folk’ show.

True False True Lover is an evident representation of our music. It combines a lot of traditions in one song, and the content is pretty angry and dark.

There are a lot of talented artists and groups at the ECMAs this year. We’re really looking forward to the East Pointers, and Les Hay Babies. Amy’s uncle, Scott Macmillan is also nominated this year and is a great talent. As far as East Coast music goes, there’s too many to name. We’re both very influenced by Maritime music. The Jarvis Benoit quartet, to name one local group, is one of our favourites. Amy is particularly influenced by the recordings collected by Helen Creighton of singers in the Maritimes. The list could go on.

We’ve picked up a lot of tidbits of knowledge over the years that we are grateful for. One of the things we’ve learned is that we are allowed to value our work as musicians and artists, and the time it takes to hone our craft. Overall the most important thing is to stay honest in all things, no matter what other people say.

We will be touring pretty consistently through Canada and the US this year, and then settling down in the winter to write and start planning a second album. Keep an ear and eye out, we’ll be all over the place!