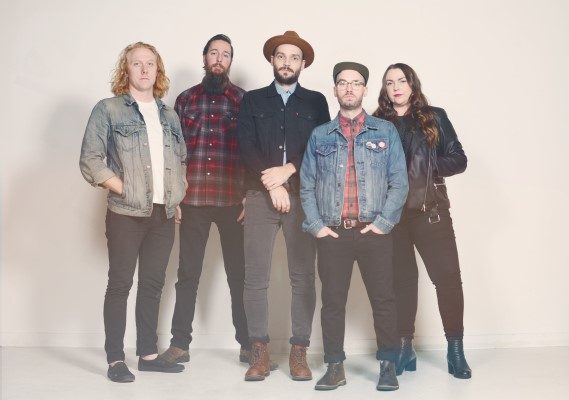 Recently I had the opportunity to check out The Long War’s debut album Landscapes and ask them questions about their band, their musical influences, their defined genre as a multi-influenced band, and the new album.  Enjoy!

First off, thanks for taking the time to answer questions today!

Congratulations on the debut album!  Landscapes is, front to back, a great record.

Discuss the choice behind the title Landscapes for the album?  How is the idea of landscapes important to The Long War?

Jarrett: Landscapes tied together a theme that kept coming up in almost every song.  Looking back the songs are about the places I’ve been and the people I’ve met along the way who’ve had an impact on me.  I’ve traveled across the country a lot sometimes back and forth and I was really torn between whether I wanted to continue pursuing music as a career or to move on from it.  I’ve lived in the Yukon, spent time in Ottawa and passed through Lake Louise only to eventually find myself out west in BC.  I began drawing from the emotion of this journey and drawing parallels to all the personal stuff I was going through at the time. Feelings like the fear of change, facing the unknown and the uncertainty that comes with what felt like failure at the time.  All the while drifting across our beautifully vast and unique Canadian landscape.

Who developed the cover art for Landscapes and how does the imagery apply to the entire album?

Jarrett: The photo was taken from Centre Island in Toronto and I wanted to find something that reminded me of where I grew up. I was born in Toronto and lived in The Beaches the first few years of my life.  I have some memories that fade in and out of that time and place so the picture has a sort of reminiscent quality for me.  It has a vintage appeal that suits the band’s vibe, it features the old Toronto skyline and there’s a woman in the photo weirdly facing away from the water.  It’s the contrast between nature and cityscape that was intriguing, and the human perspective watching as the world changes around her, it summed up the album in one photo.  Raine Playfair was our album designer, she did a great job putting it together.

The record is a mix of good driving, yet relaxed, rock tunes with art sensibilities, country folk with lush harmonies, and a tinge of ongoing heartbreak.  Who are your main musical influences?

Jarrett: We’re influenced by all kinds of stuff as a band from Wilco to Noah Gundersen, The War On Drugs to Jeff Buckley.   I grew up listening to Leonard Cohen, Joni Mitchell, Steely Dan and Neil Young.  That stuff was always getting played in my house.  I’m actually named after the Jazz pianist Keith Jarrett and Chad is named after Country artist Chad Allan. It’s a very eclectic mix of influences that certainly exists sonically in our album.  But I think that variety really lends itself to our sound and for this record, I really wanted to just put authentic, honest songs on it.

The line “landscapes change/people stay the same” is a striking image.  How does this juxtaposition of physical permanence and emotional transience pertain to the album?

Jarrett: I have had a tendency my whole life to run away.  I’ve blamed the places I wound up for never quite living up to what I imagined rather than looking within.  The album has a lot of longing in the lyrics, there’s self-doubt, regret and love lost.  But there’s also hope there’s some healing in it too and some self-realization.  I’m trying to uncover if what I’m feeling is true regret or just an over examination of the unknown and a fantastical wonderment of what might have been.  I really feel like this record has helped me feel grounded and happier about where I am at in my life.  I’ve spent a lot of time fighting the person I really am and I’m done with all that.

How did winning the 2017 CBC Searchlight Competition contribute to The Long War’s successes and how does it feel to make the CBC Top 100 Chart of songs in 2017?

Chad:  Winning the 2017 CBC Searchlight Competition has been an unbelievable experience.  I don’t think any of us could have imagined we would come out on top when Jarrett first applied for the contest in January 2017. However, there has been no resting on our laurels since the win.  We have viewed this accomplishment as an incredible opportunity, one we are diligently working towards making the most of.  CBC is an invaluable platform for Canadian artists to have their music heard and we are very excited to not only have our single Breathe In Breathe Out to share but also our full album Landscapes.  Having  Breathe In Breathe Out included in the CBC Top 100 Songs of 2017 has certainly exceeded any of our wildest expectations.

What has been a career highlight so far?

Jess:  This past year has been a whirlwind of so many good memories!  A few of our careers highlights so far have definitely been performing at the National Arts Centre in Ottawa, our performance and interview with Tom Power on q, debuting the songs off our album at CBC Music’s First Play Live, as well as recording at Metalworks Studios and releasing our debut album Landscapes to vinyl.

If you could book your own dream show, if time and history was not a factor, who would be your dream opening gig and why?

Neil:  With time and history not being a factor, a dream opening gig would be for Bob Dylan on his first official electric tour backed up by The Band in 1966.

As a band, your members have vast personal interests, from animals to traveling to sports.  If you were to create a concept album based on your personal interests and backgrounds, what would be the concept or story?  I’m thinking fantasy minstrel warrior cats who carve their own wooden weapons traveling the countryside looking for adventures.  Thoughts?

Carson: I don’t know anyone could possibly top anything so amazing!  If we ever get the opportunity to create a concept album, I promise you it will be about fantasy minstrel warrior cats who carve their own wooden weapons travelling the countryside looking for adventure.  You can hold us to that.

Given the chance to produce The Long War tribute album, what bands would you choose, if budget, time and history, were not an issue, to cover your tunes?

Landscapes is being released the same date as the cultural phenomena Super Troopers II.  Any fear of losing market share to such a dynamic movie release, or do you think there is a way to cross promote the two projects?

Chad:  We feel there is some definite room for a collab with the two projects releasing in tandem.  We’ve already reached out to Jay Chandrasekhar and Broken Lizard to see if there’s any chance we can do some cross promo.  We’re playing the long game here and hoping for placement in Super Troopers 3 and maybe even a cameo, though we’re still waiting to hear back from his people.

The use of harmonies and multi-vocalists throughout the songs adds a wonderful texture to the record.  Was it important in forming the band to have multiple singers or was it a creative, happy accident?

Jarrett:  It was a creative, happy accident.  When Chad and I started singing together we immediately recognized the differences in the timbre of our voices and just our approaches as vocalists are both unique.  That became the foundation and from there we layered in Jess and Neil’s voices.  We love harmonies and consciously put our vocals forward.

Your songs are thoughtful, introspective, and well-crafted, singer-songwriter folk-rock with a touch of pop sensibilities.  What type of music fan do you find you attract to your shows? Is there any difficulty marketing yourselves having a diverse sonic palette?

Jarrett:  We want to attract a listening crowd, we can definitely get people out of their chairs but we want to play for true music lovers.   I’m not sure there is a particular demographic we’re trying to reach. We understand our music casts a wide net and find we get all sorts of fans through the diversity of our songs.

On your upcoming tour are there any locales or show highlights, any rooms that are personal band favourites to play?

Chad:  We are playing a lot of diverse venues on this tour, everything from house shows to big theatre stages.  Jarrett and I have both spent a significant amount of time in Ottawa and have always dreamed of playing the iconic Black Sheep Inn in Wakefield, QC and will finally have the opportunity April 28th.  Another notable venue is the historic Empire Theatre in my hometown of Belleville, ON.  May 4th will be my first show at home and I couldn’t ask for a better venue to share these songs with family and friends.