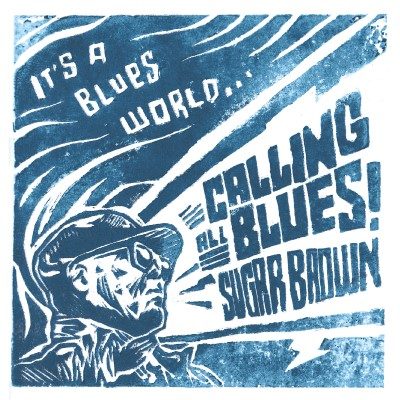 It’s a perfect evening for the blues. It’s raining like hell and seagulls are huddled miserably staring up at the clouds in an existential “Why Me?” funk. I’m curled up with Jim Beam and listening to Sugar Brown‘s third album: It’s a Blues World. I have it running through my Sunbuck Tube Amplifier which decompresses the digital audio leaving the warm melty-mono sound of vinyl coming through my earphones. The mono effect is perfect for this album and the whole mix is “Down In The Wash” in the best tradition of a JJ Cale mix. It’s A Blues World sounds careless but produced with purpose and great care, this cognitive dissonance is a thread that runs through the whole album and keeps that hollow inside a box sound through every track. I’m watching my VU Meter bounce and thinking that this album is as an eclectic blues experience as you’ll find in 2018. Sugar Brown’s style is drawn from many places but I keep coming back to 2120 South Michigan Avenue, the home of Chess Records where, for almost every titanic blues musician, the great migration from the South ended in that peg board studio covered with patch cables and the sixty cycle hum of a busted fuse in a guitar amp. Sugar Brown is both a throwback to that time and firmly rooted in the present. He gives us thirteen tracks on this album

“Hummingbird” is the first track. The very beginning, you hear a voice from the control sounding so much like the patter from The Chess brothers that it brings you to that moment when Howlin Wolf or Sonny Boy Williamson was recording. There is an echo of Booker T And The MG’s in the opening bars and the mono recording is genius. In the back is a marvelous piano, big box guitar on what sounds like heavy gauge strings, fuzzy vocals with an up-tempo bounce that gets your foot tappin’

“Lousy Dime” is my favourite track on the album. From start to finish there is not a misplaced note, a bad change or a fault in performance or production. As soon as this track started I laughed and said “Tom Waits”. The song itself is close to Waits’ “Sixteen Shells From A Thirty Ought Six” with the same deconstructed, broken down sound that Waits has turned into a genre of its own, but then out of nowhere, an Appalachian fiddle brings the whole thing together and the groove is outrageous.

The title track on the album “It’s A Blues World”  is a call and response track. This track has a seriously heavy vibe. It is slow, syrupy, sultry and Urban. It’s what I like to call “Circling The Drain Blues” The piano again is genius, making me think of Billy Preston.

“Hard To Love” follows “It’s A Blues World” and is a country blues offering. The song reflects that Delta Blues hard luck and trouble or a good man feelin’ bad made famous by Muddy Waters, Howlin Wolf and John Lee Hooker. I found this to be the weakest song on the album. The lyrics are crowded into the time signature giving it a forced feeling that breaks the flow of the previous tracks. The lack of cohesion and the jolty nature of the lyrics separate this track from the others.  However the next track,  “Frying Pan” hits where “Hard To Love” misses. I can hear the nasty blues rattle of  Seasick Steve and his crazy drummer Dan Magnusson all through this song. The song jumps up and grabs you and the band is so tight it makes you grin. If you are a fan of the riff, you will find that this track is an absolute killer.

Sugar continues to show his deep education and love of the blues in “Tide Blues” which is an echo of  Robert Johnson and could have come out of a 1930’s juke joint. This is chicken and waffle blues and the tone of Sugar’s voice just above the piano is so good I replayed it a few times just to hear the vocal and piano run all over this track without ever losing their place in the song. “Those Things You Said” follows “Tide Blues” and just barely misses the mark. If it were stripped down to the powerfully tribal drum and vocal combo and that quick hit on the chord, it would be a favourite but the changes are rough and the song feels like it was an afterthought.

As is the case with “Frying Pan” killing it after the miss of “Hard To Love”.  “Dew On The Grass” shows the depth, range and talent of Sugar Brown. If you could combine the harp and sound of Sonny Boy Williamson with the guitar of Django Reinhardt then mix it all up with a Stray Cats vibe, you’d get “Dew On The Grass”. This track is an audacious fusion of blues/jazz and swing that is impossible to dismiss as anything but Sugar Brown’s sound. The last track is sometimes a throwaway or a filler but “Brothers” is not. This track carries the soul of the coffee house folk movement. I thought of Dave Van Ronk while listening to it and the song ends as the album began, with that hollow “mono to tape” vintage feel you don’t hear in new music anymore and with a fat horn section, its long slow bends the guitar solo’s sound like a prayer to BB King. Sugar Brown’s smoky vocals and that great whisper in his voice bring a depth and an urban vibe to the blues genre.