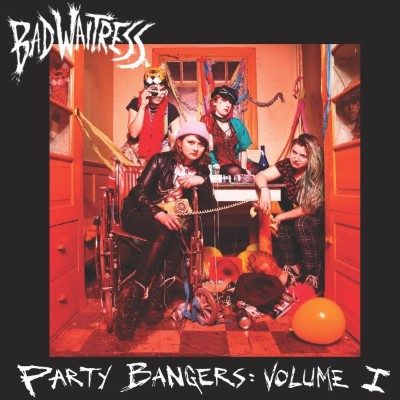 Bad Waitress, an all-girl punk rock group from Toronto, Ontario released their latest EP Party Bangers Vol. 1 on April 20th. As a fan of punk music in general, I was excited to check this album out.

The 6 songs on the album have a short play time which is common in punk songs. The longest song being 2 minutes long. Each song has a heavy drum beat, distorted guitars and heavy vocals making this a classic punk style album. I can compare them to The Donnas, an all-girl punk group that paved ways for women in the punk music scene.

“Rabid Dog” caught me right away. The music is very heavy with the band providing multiple gang vocals, a staple in punk music. This is one song I can see people forming a mosh pit and just jumping and kicking everywhere to this heavy song.

Anyone who is wondering about this bands sound, “Acid Brain” was released before the EP was released and it’s a great introduction to the band and their heavy punk influenced demeanor. This entire album has different punk stylings and “Acid Brain” is barely one of them.

Overall, Bad Waitress’ named the album correctly, these songs are party bangers. I would gladly join a mosh pit if these women were performing as I know me and everyone in there would be having the time of our lives. Since this is volume 1, I’ll be checking out volume 2 once it surfaces.