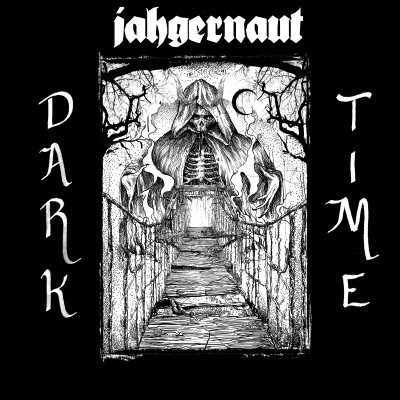 Jahgernaut releases their debut EP Dark Time to a capacity crowd at Coalition T.O., April 6th. Through each of its seven tracks, the album blisters with a rage and intensity Jahgernaut has quickly become known for. The four have all been mainstays in the Toronto music scene for well over a decade, coming together to deliver crushing, riff-based music.

Wasting no time, a quick guitar introduction to opening song “An Ounce at a Time” is the listener’s entrée into driving southern metal guitars and howling vocals. While somewhat typical in riffing at times, the guitar solo explodes forth when it hits, counterpointed perfectly by dynamic drumming. In “Runaround” you hear the hardcore and death metal influence in vocalist Jay Grizz, spitting venom with every word. An almost Slipknot-like dissonance permeates this track, raising hairs on the back of your neck. With “Plain Sight” the mood becomes more foreboding. The later verses and choruses feel slightly anthemic in their musicality. “The Riot (Is All Yours)” begins like a punk song, but then assails you with thrash metal shredding. Vocalist Jay Grizz continues to push the limits of his vocal prowess. Though never deviating from harsh vocal style, his ability is impressively wide within its genre. A funeral march wraps up this rager, guitar strumming openly, soloing with restrained frenzy.

The title track hits the ground running, raw and visceral. “Dark Time” conveys a sense of great anger at the world around it, awakening a primal urge to yell and scream along with it. On “Muffled”, Grizz’s vocals and lyrics take the forefront. On guitars, Kyle Smith and Jody Brown chug along, omnipresent and unyielding. Jason Lioumanis’ drums are a pulse, the heartbeat of the song, accenting grooves within the pounding barrage. “Head Full” is ponderous, beautifully coloured drums anchoring everything in a snakecharmer’s sway. Beneath the rippling layer of the main guitar is a wailing banshee’s howl of another guitar moving across the soundscape, weaving with the bass guitar in the verses particularly. Suddenly it shifts into high gear and once again the heavy metal riffing and not one, but two highly electrifying solos close out this absolute ‘banger of an album. An impressive debut album, by any stretch of the imagination. This writer waits in anticipation of how Jahgernaut chooses to approach the growth of their sound in the near future.